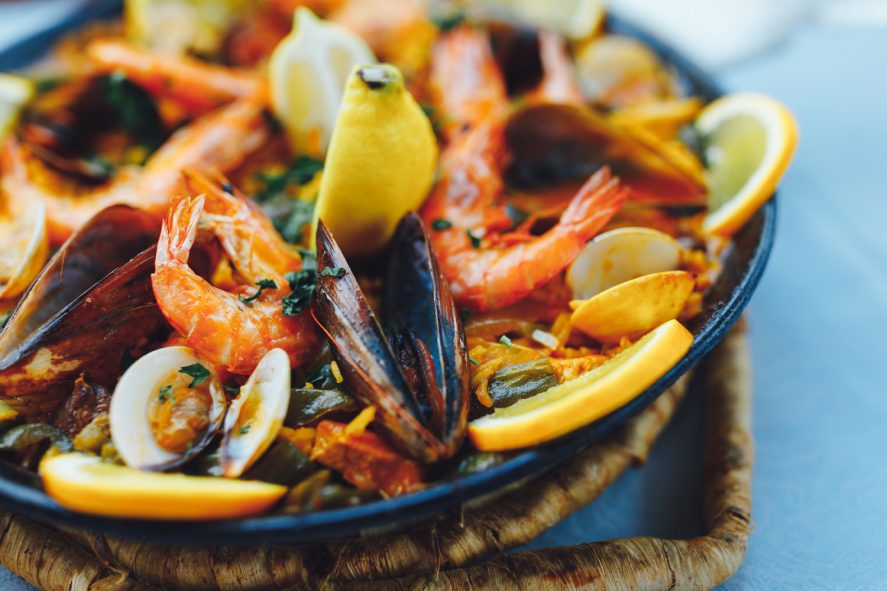 Spain is the most popular holiday destination for people in the UK, and no dish is as synonymous with Spanish culture and cuisine as paella. And, if you’re looking for a sunshine-inspired meal, then paella – with its bright yellow, saffron-infused rice – is an ideal candidate.

Thought to have originated in Valencia, on Spain’s eastern coastline, paella is traditionally cooked on an open fire – but you can make a great version of it on the hob at home.

Traditional paella uses fresh fish, shrimp, squid, mussels and clams, but according to the Spanish, the real star of the show is the rice, which is plumped up with fragrant broth and flavoured with saffron, garlic and paprika. The mark of a good paella is the socarrat, which is the crispy bottom layer of rice that forms as the stock evaporates, and gives paella its distinctive texture and rich, caramelised taste.

To make a traditional paella, why not try making this recipe by Epicurious, which uses squid, mussels, and shrimp? Alternatively, you might want to try Jamie Oliver’s seafood paella, which has the extra addition of monkfish and clams.

If you don’t eat seafood, there’s no need to miss out on a dish that looks (and tastes) this uplifting and sunny. It might not be authentic but there are dozens of excellent veggie paella recipes, like this one by Dishing Out The Health. Or, check out the video below, where chef Gaz Oakley uses meaty oyster mushrooms to create an exotic and delicious plant-based paella!