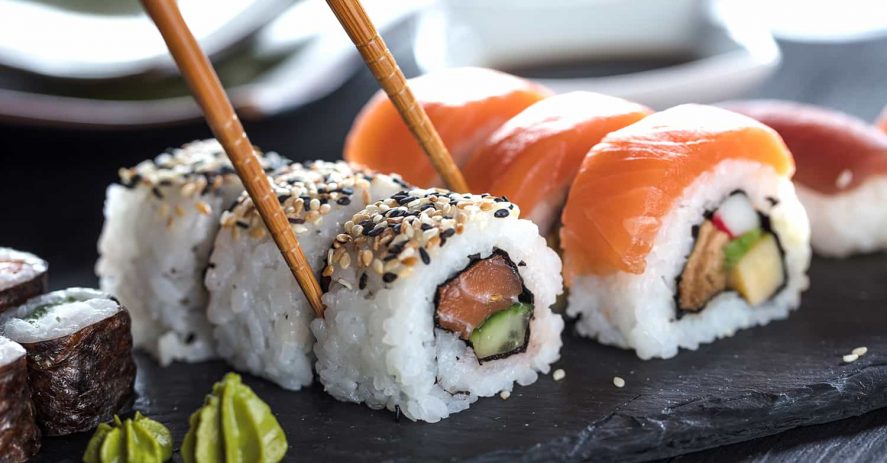 And finally, you can’t have an article on Japanese food and not mention sushi. Perhaps the most iconic Japanese dish, sushi is actually believed to have originated in China between the 5th and the 3rd centuries BC, when fermented rice was used to preserve fish. While it’s widely believed that “sushi” means “raw fish”, it actually refers to vinegared rice served with different accompaniments.

There are many different shapes and flavours of sushi, and while some, like California rolls, are modern, Western creations, others have been made and eaten in Japan since the 8th century. Maki is a type of sushi where the rice and other ingredients are rolled in nori, a sheet of dried seaweed – and this has been popular since the 1700s, when sheet nori was first invented.

Nigiri is another one of the most popular types of sushi. Nigiri sushi is made up of a cylinder of sushi topped with either seafood, vegetables, meat, omelette or tofu, and it was believed to have been created in Tokyo in the 1800s, when an innovative chef wanted to make a quick snack for the workers in the area. But maki and nigiri are just the tip of the iceberg when it comes to sushi!

Making your own sushi from home usually requires a bit of practise, as the act of rolling it up can take a while to master – but if you love sushi it’s absolutely worth the effort. Being able to make delicious, fresh sushi from scratch won’t only impress your friends, it’ll also save you money, and because it’s so versatile, it’s a great way to use up leftover ingredients.

To find out how to make the perfect fish sushi from home, have a read of this sushi guide by Food 52. Or, to browse some of the best veggie sushi recipes, head over to Insanely Good Recipes.

To learn more about making sushi, you might also want to have a watch of the video below.