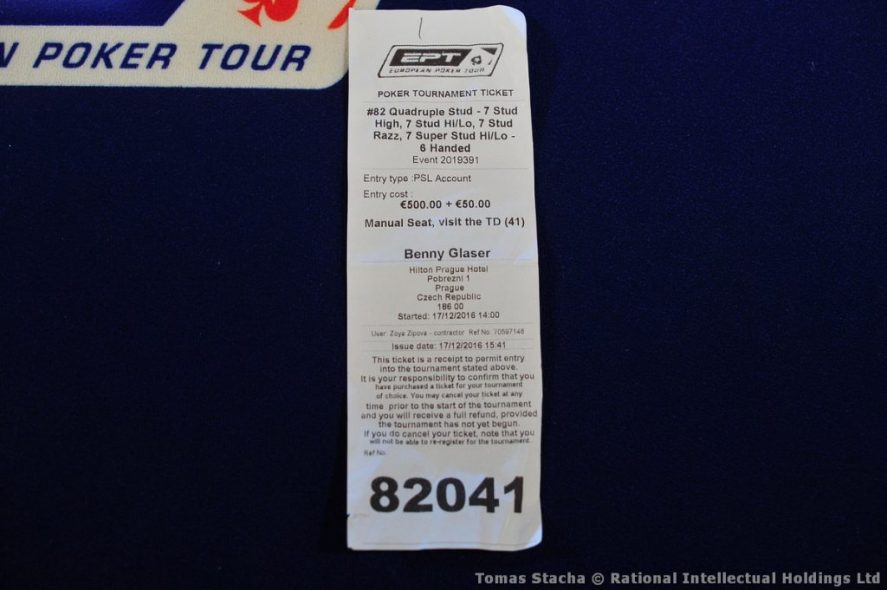 If you turn up to a major live poker festival, you’ll almost always find the so-called Main Event being played with the no-limit Texas hold’em variant. NLHE, as it’s often known, remains by far the most popular format of poker, particularly for tournaments, and that seems likely to remain true for many years hence.

However, there will also be people at that festival who will go the whole week without ever playing hold’em. Major festivals such as the World Series of Poker (WSOP) and the European Poker Tour (EPT) also offer a rich schedule of other games. It’s also true of festivals of online poker — such as WCOOP and SCOOP — where there are several hundred tournaments, including any number of less popular, but no less intriguing variants.

A tournament ticket for the “quadruple stud”

These non-hold’em variants are known as “Mixed Games” — a broad term encompassing everything from Omaha to razz; seven-card stud to five-card draw, and lots more besides. There are also tournament formats such as HORSE and SHOE, or 8-Game, which combine many different variants into one tournament.

SHOE, for instance, is an acronym for Stud, Hold’em, Omaha and Omaha Eight or Better (i.e., Omaha Hi/Lo), whereas HORSE includes Razz and gains its R. Players play each of these games, in rotation, throughout the entire tournament, and players will need to be masters (or at least competent) in each of the disciplines to prosper.

Mixed-game aficionados are passionate about their craft, and can provide a list of numerous reasons why the games are more exciting than hold’em. Whether or not we agree with the explanations, we can at least admit that mixed games require players to expand their skill set. And with that in mind, here’s a brief overview of some of the most popular non hold’em poker variants.

The game of Omaha as we know it today is comparable to regular hold’em in almost every way, except one. And it’s a significant difference. In Omaha, players receive four hole cards instead of two, and they must use two of them when forming their five-card poker hand.

Most newcomers to Omaha very easily grasp the first part — you just get four cards to remember — but can struggle with the second. Unlike hold’em, where you will often just match one of your hole cards with the board, and sometimes none, you absolutely must use precisely two when you’re forming your hand. Getting dealt four cards of the same suit is not that great, because you’d still need to see three board cards of that suit to have a flush. And in the unlikely event that you were dealt four of a kind, you actually only have a pair — and you wouldn’t be able to make a straight or a flush.

Any two cards from four in Omaha

The differences might sound subtle, but they have a profound impact on game-play. Just about any hand tends to look potentially playable pre-flop — so many opportunities! — which is why betting is often restricted to “pot-limit”. In fact, many people tend to refer to Omaha routinely as PLO — short for pot-limit Omaha.

Flops almost always bring multiple draws to various hands, and it’s very rare to win at showdown in Omaha with just one pair. The very best players are able to assess their hand’s potential, measure it against their opponents’ likely holdings, and size bets perfectly to get a desired response.

Omaha also makes a really good high/low game, where players aim to make one “high” hand and one “low” hand at the same time, and the pot is split between the two. This is sometimes called Omaha 8 or Better (written as O8) as the low hand needs to contain five cards ranked 8 or lower. This is usually played with limit betting.

In recent years, particularly online, there has also been an appetite for 5-Card Omaha, in which you get five cards each, and the game is sometimes played no limit.

PokerStars Learn has a typically comprehensive guide to PLO if you want to learn more.

And you can also read some excellent other overviews:

So-called “stud” poker differs from hold’em in that there are no community cards. Instead, each player in a stud hand receives a mixture of “up” cards and “down” cards, but these cards are the individual player’s alone.

In seven-card stud, which is the most common stud variant these days, the hand begins after each player has received two down cards, in the hole, and one up card, i.e., face up for everyone to see. There is then a betting round, before remaining players get another up card. This pattern repeats through two more “streets” — betting round, up card — until on seventh street, the final card is dealt face down. There is then a final betting round, where remaining players will have three down cards and four up cards, from which they make their five-card poker hand.

Seven-card stud pre-dates hold’em, and it contains less uncertainty. By the end of a betting round, players will likely have seen considerably more cards than they would in hold’em, with each player potentially having four up cards revealed. (It means you can more accurately estimate whether someone has hit their draw, or whether you’re going to hit your own.)

But with up to three down cards too, there’s still huge scope for deception. Players can have trips, full houses and even quads all but totally disguised.

Officially a type of stud poker, “razz” is a so-called low-ball game in which the winner of a hand has what in other variants would be considered the “worst” (i.e., lowest-ranked) hand. Razz players see seven cards, dealt in exactly the same fashion as with a seven-card stud hand. But the best hand here contains the lowest five cards and no pairs. (Straights and flushes do not count.)

This is another game in which paying attention to what cards are out there (or have been folded) is crucial. You always want to avoid pairs, so it’s great when you see the cards that might pair your hole cards land in opponents’ hands. You also always get to see so much of your opponents’ completed hands that you can often figure out their best possible holdings, and make bets accordingly, especially if your own up cards look favourable.

HOW TO PLAY: RAZZ

Before the Texas hold’em boom, most players would be introduced to poker through a draw game. This is the one where you get dealt a certain number of cards, then throw a few of them away, and get some replacements, all the while betting on what you have in your hand — or what you want your opponents to think you have in your hand.

The game gets its name from the process of discarding and exchanging — you “draw” new cards from the deck.

Typically the game is five-card draw, and that means each player is dealt five cards, all face down. There might be a betting round at this stage, before players state how many cards they are discarding and how many new cards they will draw. (If you “stand pat”, you decline the opportunity to draw and tacitly state that you’re happy with what you’ve already got.)

In a “single draw” game, there’s only one opportunity to replace cards. In “triple draw” you get three opportunities, and are therefore faced with more decisions but can end up with a much better hand.

Old school draw games were simply won by the best hand, according to standard hand rankings. But you can also play deuce-to-seven (single or triple) draw, in which the lowest ranking hand wins. Aces are high here, and flushes, straights, trips and pairs all count. It means the best hand in deuce-to-seven is an unsuited 7-5-4-3-2 — i.e., the five lowest uncoordinated cards.

You play one orbit of all of the games, before it’s on to the next one.

A dealer’s choice tournament potentially offers all of the above, and more. In this kind of tournament, the player on the button gets to choose what game will be played for the coming orbit. In organised tournaments, there will probably be an agreed list of games to choose from, but in home games, the floor might be totally open. Players could opt for some devilishly complicated variants, potentially of their own invention. The good news is that the game will change again after the orbit is over.

It’s also worth noting here that Mason “PyefacePoker” Pye, one of PokerStars team of streaming ambassadors, is an enthusiastic mixed game player, spearheading what he calls his Mixed Game Movement. You can follow his Twitch channel – Twitch.tv/pyefacepoker, where you’ll find him playing mixed games most days in the week.