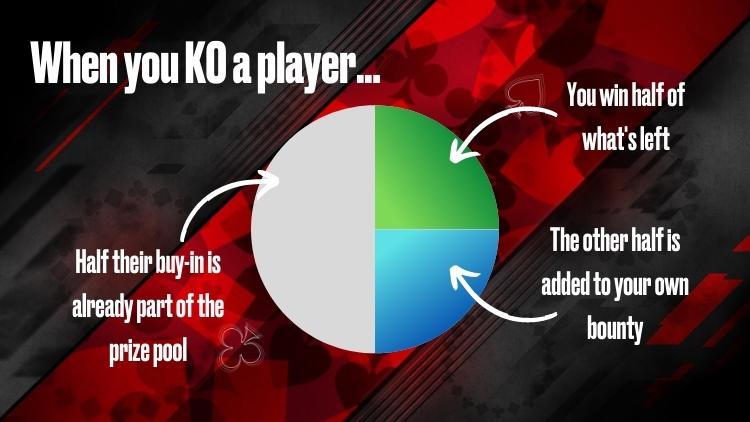 It’s KO Week at PokerStars — where KO stands for Knock Out. It means 76 tournaments over eight days where busting players and collecting their bounties can earn you a good deal more than just the published payout.

KO format tournaments are always fun, and they demand a slight variation to your usual tournament strategy. Thankfully, we’ve been collating articles focusing on KO events for several years, and here’s a selection of the best.

Read through some of our previous content on this subject, and we look forward to seeing you at the KO tables.

The concept is simple. When you buy in and take a seat in a knockout tournament, you have a bounty hanging over your head.

It sounds simple, doesn’t it? And it is. But it does make this a unique format. And one that requires a few tweaks when it comes to strategy and how best to play a KO event.

It means your own strategy needs to change depending on the size of your own bounty.

Find out more: How Bounty Builder events work and why you should play them.

What’s the difference between KO, PKO and TKO poker?

This is one of those important details to get right before you jump into KO tournament.

The easiest way to get a quick rundown on the differences is to check out our article, complete with very helpful pictures, that explains the differences between KO, PKO and TKO tournaments.

In these events your total buy-in is divided into two portions. Each portion goes to a separate section of the prize pool.

One portion (usually the largest) goes into the regular prize pool. That’s paid to the top finishers in the event, just as you’d expect in any regular tournament you might play.

The second portion goes straight into the bounty prize pool. When you knock someone out, you pick up that bounty. If someone knocks you out, they pick up your bounty. But the bounty doesn’t change size as the tournament goes on.

Here’s what happens when you knock out a player

Remember: in a KO or a PKO tournament, one portion of a player’s buy-in goes into a prize pool, just it would in a “normal” tournament. The other portion goes into the bounty pool. Those amounts are usually half and half.

But here’s the interesting bit.

If you knock out an opponent in a PKO tournament, half of their bounty goes straight into your account as a cash prize. The other half is added to your bounty.

The more players you knock out, the more you win. But your bounty also grows bigger, so the bigger the target you become.

Find out more: What’s the difference between KO, PKO and TKO poker?

Getting to grips with the mathematics of bounties

That leads us on to the next stage. Doing the maths.

This can put off a lot of players. We may be poker players. But that doesn’t automatically make us maths geniuses.

It can get a little tricky working out what money goes where. Also, what that means in terms of odds and all-important equity.

Luckily, we’ve done all the complicated bit for you in our post about getting to grips with the mathematics of bounties.

You’ll find practical examples, all the sums, and even a simple way to remember it all while you’re in the middle of a game.

As the article says, the moment you knock out a player their bounty is split between your bankroll and your own bounty.

Knowing how this changes the way you should play puts you ahead of those other players oblivious to the details.

“We have to aggressively try and knock out as many people as possible, and that means we have to crunch the equity numbers.”

The Maths of bounties

Find out more: Getting to grips with the mathematics of bounties

Five tips to make you a better KO poker player

KO tournaments require a different approach to regular tournaments. It’s not simply a case of playing the same strategy you might use in a freezeout. You have to be aware of your own situation as well as those players around you.

Our five tips should help you out.

In it we’ll take you step-by-step through the whole process.

Starting with the simple strategy of surviving (probably the single best plan in any tournament).

Sometimes you don’t have a lot of time to read back on articles and information about what to do and when to do it.

Sometimes you just need a quick recap on KO strategy that you can go through without having to give up valuable playing time.

You probably want it to be impartial too.

So don’t take our word for it. Take the word of pro player Dara O’Kearney and journalist Barry Carter, who managed to condense everything there is to know about Progressive Knockout tournaments into their book PKO Poker Strategy.

Wait a minute, I hear you say. Didn’t you mention this was for people short on time?

Well, the book is excellent. But we also have an excerpt of the book that will help you improve your progressive knock out tournament results in about 30 minutes.

That’s about how long it takes to read.

This one section will teach you how to adapt your play to suit the types of players you’re up against. You’ll get a few golden rules for playing bounty events.

Plus, a wise word about bluffing, along with the kind of hands hold up more than you might expect.

It’s an easy read, full of detail, and well worth your time. Spend a couple bounties on getting yourself a copy.

Find out more: Improve your progressive knock out tournament results in about 30 minutes.

You’re going to run into a huge variety of players and playing styles over the course of Bounty Builder Series. There are 196 tournaments over 15 days. It’s unavoidable.

That includes everyone from your typical maniac to those players pushing and hoping with a short stack.

It makes sense then to know exactly which type of player you should welcome to your table, and which you might want to be cautious around.

Put another way… which players can make you money and which will take yours?

We identified five different types of players for each of those categories.

And here’s the second category.

Big stacks who have you covered
Players with tiny bounties in marginal situations
Tight players with a short to medium stack
Loose big stacks against your marginal hand
The pros.

If you hadn’t worked it out yet, the first group will increase your chances of making money. The second group could end up costing you.

Remember, there are dozens of variables to consider for each situation in poker. There’s no sure-fire rule. These are simply guidelines to get your up to date on various possibilities.

Finally, one last effort to persuade anyone who might still be on the fence about KO tournaments.

If you’re curious but need a little more information about why you should play, the folks over at PokerStars Learn might be able to persuade you.

It’s not just that you don’t have to make the money bubble to come away with prize money, although we think that’s one of the coolest things about Bounty events.

As they Pete Clarke of PokerStars Learn puts it,

“For tournament players, the grind can often feel like a volatile rollercoaster of long hours and little downtime. One type of tournament that will definitely spice up your poker calendar is the progressive knockout.”

So here they are.

So, there you have it.

Going through each of the steps above will help prepare you for a decent start to the series when it gets underway. And for KO tournaments in general whenever you play on PokerStars.