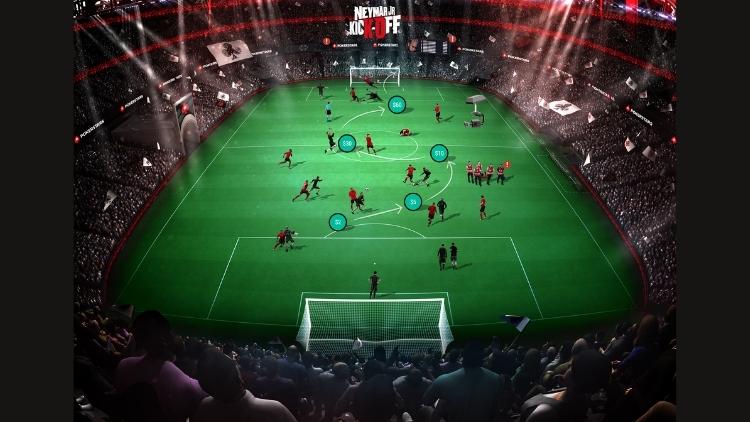 There’s a new look to Grand Tour on PokerStars.

Gone is the finish line. Gone are the bikes. In their place is a goal line, the back of the net, and a very familiar face.

Today we’re introducing Neymar Jr Kick Off, a new look to an old game, fronted by a football icon who knows a thing or two about the back of the net.

Kick Off works the same way as Grand Tour.

The same hyper-turbo format remains, as does the chance to win bounties from the very first hand.

There’s also the same $1 buy-in to give more players more chance of logging off with money in your bank roll.

So if you want to know more, or need a recap on how the game works, read on.

How Neymar Jr Kick Off works

The game is made up of six football themed sprints, and with cash to win around every turn.

There are five of these sprints, played as 4-handed hyper-turbo Sit & Go’s using a progressive KO format.

Getting started in the first sprint

For every player you KO you win cash, and you play until you’re the last of the four players standing. If you’re eliminated you keep the bounties you win no matter what.

So let’s assume you emerge the winner of one of these four-handed games. What happens then?

Prizes increase as you progress

Now you advance to the next game. Only now your own bounty value has increased, and the stakes are higher than in the previous round.

You’ll be up against players who’ve also got this far, or who choose to buy-in at this higher level. But your aim is the same –keep KO-ing players and reach the next game.

If you keep this up to the final sprint, you’ll find yourself right in front of goal playing not only for everyone else’s bounty, but your own bounty too.

The final sprint in front of goal

You can play Kick Off now on PokerStars, in both real and play money. Click on the Neymar Jr Kick Off tab in the lobby. You can’t miss it.