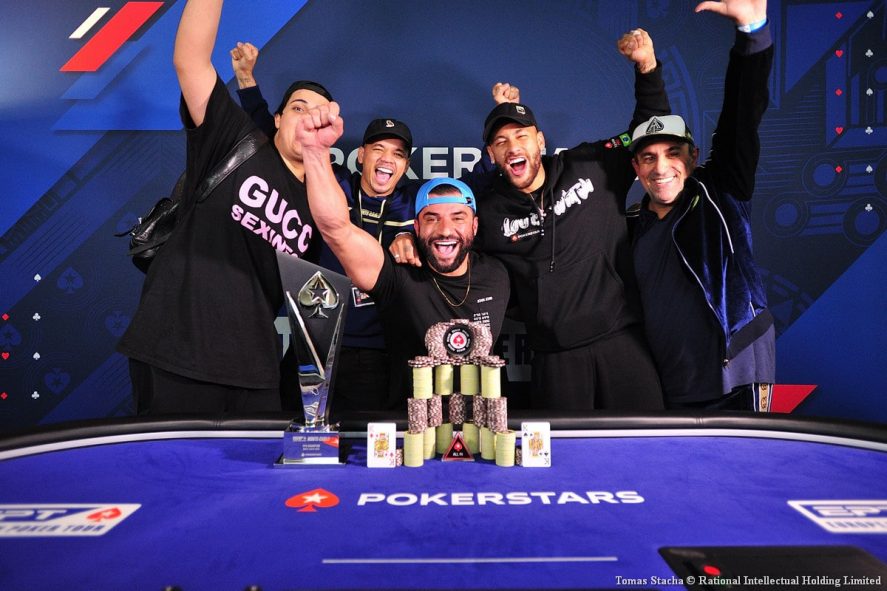 Records were broken as the EPT and FPS landed in Monte Carlo last month, and the best thing is that live events are only just getting (re-)started.

We are right around the mid-point of 2022, and the very refreshing news from the tournament rooms of the world is that live poker is most certainly back. After a difficult couple of years, where health concerns pushed poker down the priority list, the game has returned in spectacular fashion, featuring thousands of new players alongside many familiar faces, to produce some record-breaking fields.

One of the longest-standing fixtures on the global poker calendar took place for the first time since 2019, sending thousands of players to the exclusive principality for two full weeks of action.

And there really were thousands of players. The €1,100 buy-in France Poker Tour (FPS) Main Event attracted 1,918 entries (including 919 re-entries), which was a new attendance record for this tournament, or its equivalent.

Brazil’s Lucas Scafini banked a quarter of a million euro for his victory, after a heads-up deal. You read that correctly. A tournament with a €1K buy-in paid its winner €250,000. And Italy’s Fabio Peluso took €217K for second.

It just so happened that a certain other Brazilian was also in Monaco on the day that Scafini won his huge tournament. A slightly well-known athlete named Neymar Jr. was also in town, going about his daily activities with customary grace.

For Neymar — a PokerStars Ambassador, and one of the greatest soccer players on the planet — “daily activities” can mean anything from playing a €100K buy-in poker tournament, speaking to the world media, or posing for selfies with fans.

But when he found out that a countryman was in contention for such a huge win, Neymar rushed to the tables to watch the denouement. After Scafini closed the tournament out, Neymar pretty much insisted on joining in his exuberant winner’s photo: Brazilians all together celebrating this fantastic success. It’s not every day that poker players get a sporting legend and national icon to grab them by the shoulder and pose for the photographers, but that’s what happened to Scafini.

As amazing as it was to see Scafini win heaps, and then to be joined by Neymar in the photos, the man who would go on to become the true star of EPT Monte Carlo was lurking almost unnoticed in the same frame.

On the far right of that winner’s bundle stood a man named Marcelo Simoes Mesqueu, and at that stage he was known only as Scafini’s friend. But Mesqueu had a seat in the €5K EPT Main Event, and he quickly rose to prominence.

Mesqueu, a 55-year-old entrepreneur from Rio de Janeiro, was one of those poker players who largely had flown beneath the radar, despite some excellent results. Coming to Monte Carlo, he was sitting second on the Brazil Series of Poker (BSOP) Player of the Year rankings, and had a BSOP title to his name, earned in Punta del Este, Uruguay, in 2017.

He used all of his considerable skills to navigate through another massive field in Monte Carlo and take his seat at the final. He then simply bulldozed through the final table, hitting every card he needed, but winning far more than his fair share through relentless aggression.

Perhaps the most surprising fact about Mesqueu’s win, however, was that it was the first time a Brazilian had ever triumphed on the European Poker Tour. Brazil are dominant in almost all online festivals on PokerStars, but had somehow never crossed the line first in an EPT Main Event. Until this time — all part of an incredible festival for the South Americans.

In the run-up to EPT Monte Carlo, Severin Rasset, Managing Director & Commercial Officer of PokerStars acknowledged the uncertainty surrounding live events, but sought to reassure players and staff that events would only take place with every thought given to safety.

“EPT Monte-Carlo is a favourite for many,” Rassett said. “We understand that these are uncertain times for everyone. The health and safety of our players and staff is paramount to our plans and we’ll continue to communicate openly with players as each event approaches.”

He continued: “Live events have always been a big part of PokerStars, and we can’t wait to get back to the live felt and hope to see many of our players at events soon!”

The incredible turn-out suggested that the poker world agreed. It’s back to Barcelona next for the EPT, alongside the Estrellas Poker Tour, before a return to Prague in December, where the Eureka Poker Tour shares billing.

MORE FROM THE LIVE CIRCUIT

Although the EPT always hogs most of the headlines, plenty of other PokerStars events are also now taking place across the globe.

The United Kingdom and Ireland Poker Tour (UKIPT) is snaking through London, Dublin, Malta (more later) and Nottingham this year, while the France Poker Series (FPS), having made such a success of Monte Carlo, is next due in Divonne and then Aix-en-Provence.

It’s going to be a blast. Check out all the information.