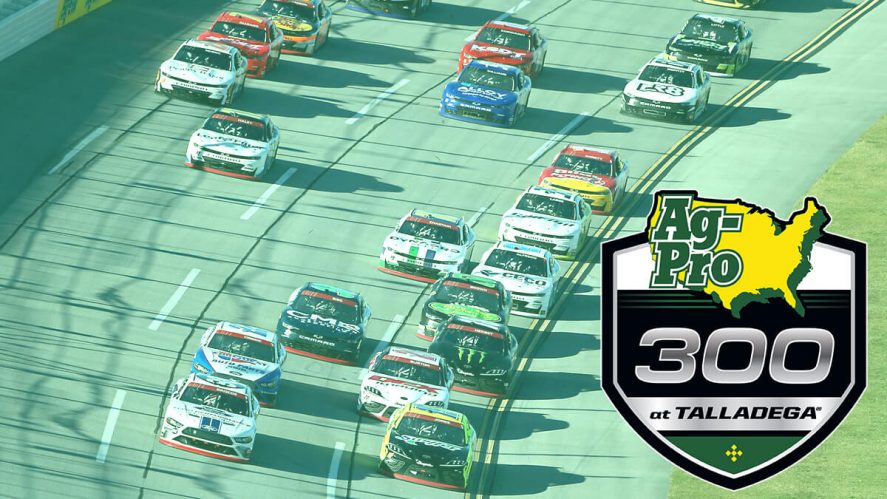 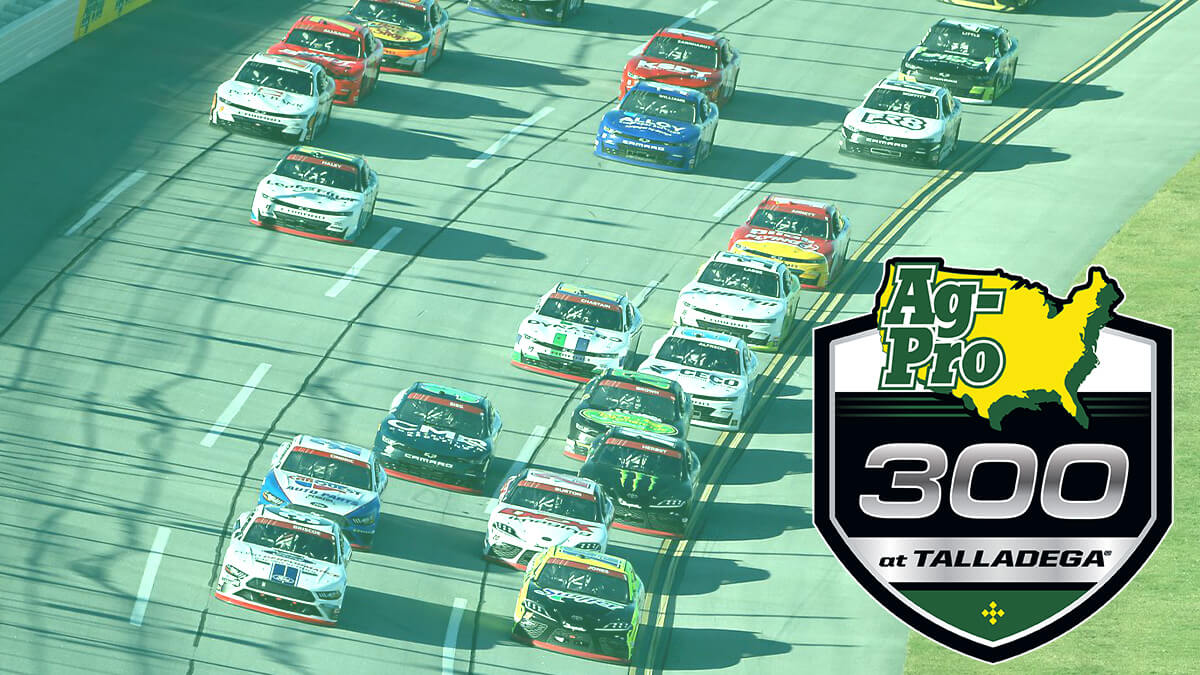 The 2022 Xfinity Series Ag-Pro 300 is part of a doubleheader at this historic track this weekend with the 2022 GEICO 500 this Sunday at the Talladega Superspeedway in Talladega, AL (TV—FOX, RADIO—MRN, SiriusXM; 3 pm EDT/2 pm CDT/12 pm PDT).

The eighth race on the 2022 NASCAR Xfinity Series Schedule, the 2022 Call Before You Dig 250 Powered by Call811.com from Martinsville Speedway in Martinsville, Virginia, saw Brandon Jones (Toyota) emerge victorious in winning his first race of the season.

The Ag-Pro 300 due to be held in the Summer before the Alabama 500, but with that race shifted forward to the Fall, the Ag-Pro became a Spring race in support of the GEICO 500.

The 2022 NASCAR Xfinity Series Ag-300 is a 113-lap, 300-mile race on a tri-oval 2.66 mile (4.28 km) very steep-banked track situated on the former Anniston Air Force Base in Lincoln, Alabama and Talladega have the longest oval track on the NASCAR circuit.

The will be three Stages in the 2022 NASCAR Xfinity Series Ag-300, with Stage 1 and Stage 2 being 25 Laps and Stage 3 running 83 Laps. This race was first run 30 years ago in 1992 when Ernie Irvan (Chevrolet) captured the checkered flag in the inaugural running.

The Weather forecast from The Weather Channel and weather.com for Talladega on Saturday is currently calling for a beautiful sunny day with a High of 83° with 10 mph Winds, with 0% Precipitation and heavy 80% Humidity in the forecast. So nice weather.

In the first race of the 2022 NASCAR Xfinity Series at Daytona International Speedway in Daytona Beach, Florida, Austin Hill won the Beef, It’s What’s For Dinner 300 with Cole Custer (20/1) winning in Round 2 in the Alliance Group 300 from Fontana, California.

In Race 3 of the 2022 Xfinity Series season at the Las Vegas Motor Speedway, Ty Gibbs (Toyota) was the winner with last year’s 2021 Go Bowling 250 winner Noah Gragson (Chevrolet) winning in Round 4 at Phoenix in his No. 9 Camaro for JR Motorsports.

Race 5 saw Gibbs become the first two-time winner as he captured the Nalley Cars 250 for Joe Gibbs Racing while in Race 6 and the Xfinity Series Pit Boss 250 at the Circuit of the Americas in Austin, Texas, AJ Allmendinger (2/1) was the winner for Kaulig Racing.

In Race 7 and the ToyotaCare 250, Gibbs won his third race of the year with Jones taking the aforementioned Call 811 Before you Dig 250 Powered by Call811.com from Martinsville Speedway as Joe Gibbs Racing won for a second consecutive week.

Here are your latest Futures odds from internet sportsbook BetUS for the winning Driver in the 2022 NASCAR Xfinity Series Ag-300 from the Talladega Superspeedway in Talladega, Alabama where AJ Almendinger and Ty Gibbs both head in as 7/1 co-favorites to win.

Chevrolet Looking for Fifth Straight Win in the AG-300

Jeb Burton (Kaulig Racing, Chevrolet) was the winner last year but oddsmakers have the defending champion currently listed at 20/1 odds to win on Saturday. In 2020, Kaulig racing won again as Justin Haley (Chevrolet) finished the 300 miles in 2:12:22.

Looking at the 2022 NASCAR Xfinity Series Points standings standings heading into Talladega, Gibbs (322 points) is now on top after his thir Win of the season with Allmendinger (342 points) in second, Gragson now at No. 3 with 300 points.

Double-digit Drivers have done fairly well so far in the 2022 NASCAR Xfinity Series with Gibbs (Las Vegas and Atlanta) and Gragson (Phoenix) both winning at healthy odds of 10/1 or better. The 2/1 odds on Allmendinger were the lowest of all 2022 NASCAR races.

The Biggest and Baddest 👊 https://t.co/cwMxrs6tYw

Gragson finished in 2nd place at Fontana and in Las Vegas, his Chevrolet finally saw the checkered flag and Victory Lane in Phoenix and he finished in 4th place in Austin so he, co-favorite here Gibbs, and Allmendinger and his Chevrolet will likely be in the mix here.

The handicap here is backing the motivated Allmendinger and his Chevrolet knowing he knows Gibbs has three wins already and the at a fourth here at Talladega might put too much distance between Gibbs and the rest of the drivers so expect a contentious race.

Almendinger was the first Kaulig Racing driver to get a Top 10 in the first six weeks of the season and the 2004 Champ Car World Series Rookie of the Year is also the only Xfinity Series driver this year who has been in the Top 10 in all eight of the Xfinity Series races.