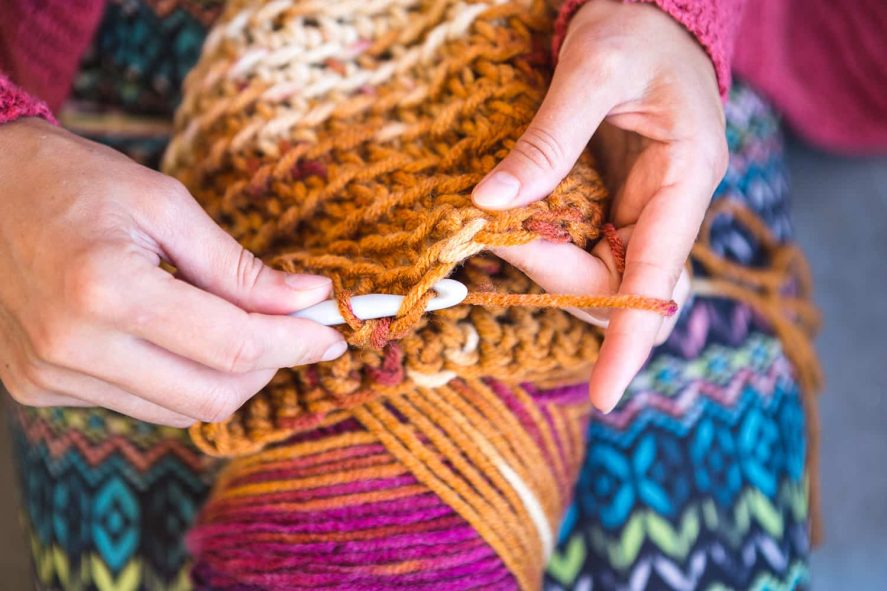 So, you’ve attached your yarn to your hook and you’re holding them both correctly – now you’re ready to start crocheting. Below, we’ll cover the most basic stitches, so you can start getting to grips with the fundamentals of crochet.

The best way to practise these stitches is to first make a foundation chain (which we’ll cover below) and use these stitches to make square pieces of fabric – which are called ‘swatches’. If you want to really nail different stitch types, try making a few swatches until your stitches are nice and even.

Although not technically a stitch, crocheting chains is usually the first skill that any beginner to the world of crochet learns. This is because these chains (often called ‘foundation chains’) are used to create the base of many projects by setting the width.

To find out how to make chains, as well as some other tips and tricks, check out the video below from Bella Coco.

The next skill any budding crochet enthusiast must learn is the double crochet stitch (referred to as the ‘single crochet stitch’ by our friends in the US). This is the first proper stitch you’ll learn. It’s a short, dense stitch and one of the most frequently used in crochet projects like toys.

To learn how to double crochet stitch, take the chain you’ve already made and follow along with the video below.

Check out the video below from Stitch and Story to find out how to make a treble crochet stitch.

When it comes to both density and height, the half treble crochet stitch is somewhere between the double and the treble. So, once you’ve mastered these two, why not tackle this one?

Take a look at the video below from Stitch and Story to find out how to make a half treble stitch.

The shortest of all the crochet stitches, the slip stitch isn’t generally used to make fabric by itself. Instead, it has many other functional uses, such as moving yarn to another part of the fabric without adding any extra height.

Take a look at the video below from Stitch and Story to find out how to make a slip stitch.

While the four stitches mentioned above are arguably the fundamental stitches involved in crochet, it might be worth having a go at these other stitches too…