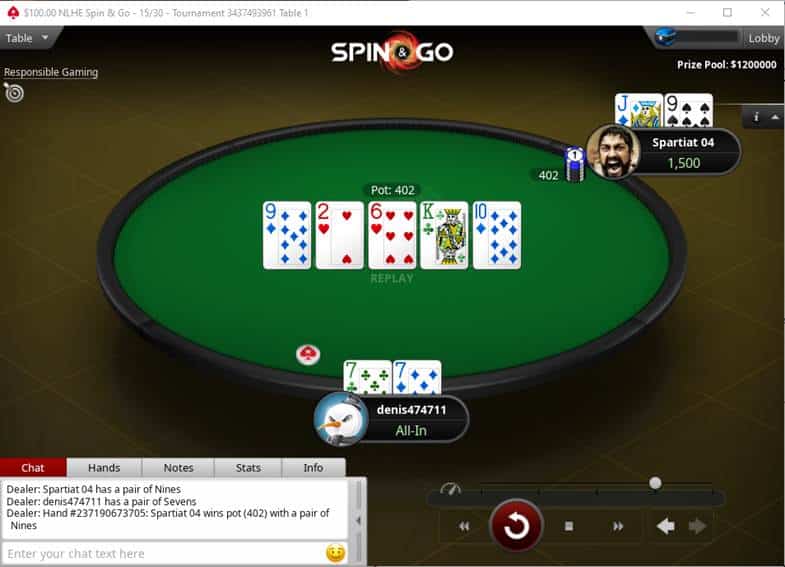 We’re not going to deny it. The odds of winning $1 million on a Spin & Go are stacked against you. But we’re here to tell you that it is possible. In fact, it just happened.

Earlier this week, Austrian player “Spartiat 04” became one of a handful of players to become overnight millionaires playing Spin & Gos.

From the moment the game started, it took just 29 hands of poker for Spartiat to claim the life changing sum. Just wow!

Spin & Gos are an exciting format of poker available on PokerStars. They are fast paced, three-handed sit & gos with a twist – the prize money is randomly determined at the start of every game.

Players can win anything from twice their buy-in to 10,000 times their buy-in. In the case of special edition Spin & Gos such as those currently running for $5 and $100, the top prize pool is $1.2 million.

That’s $1 million for first place, and $100k each for second and third.

For those who do get lucky enough to see the wheel spin to the top prize, this has to be the quickest and craziest way to win a million dollars playing poker.

A normal day turns into a shot at $1M

On Wednesday July 6, Spartiat 04, who has chosen to remain anonymous, became the most recent player to win a million dollars playing Spin & Gos.

Spartiat is essentially a recreational player who opts for the higher stakes. His biggest previous was $2,500 in a Spin & Go worth $2,500 – a fair score, but nothing too radical considering the stakes.

Spartiat describes the run up to the Spin & Go as “nothing special, a normal day”.

That “normal day” was about to turn into an exceptionally lucrative poker score.

Spartiat 04 logged on to PokerStars on July 6 to play a couple of Spin & Gos followed by a few rounds of Blackjack. After taking an hour long break, Spartiat came back to the tables and registered for the $100 Spin & Go that was about to change his life.

Suddenly, he was playing for $1 million!

Here’s how it went down…

Joining “Spartiat 04” at the $1.2 million Spin & Go table were “denis474711” of Belarus and “puskin8” of Romania. No matter what, all three of those players were already destined to walk away with at least $100k.

The game started off quite cagey, as you might expect. No funny business early on. Fourteen hands into the game, Spartiat won a decent pot with two pair to take the lead.

The real game changer came a few hands later. denis474711 made a bold shove with J♣ 7♣ and was called by puskin8 holding 7♠ 7♦, only for denis474711 to hit a Jack on the flop and devastate puskin’s stack. A couple of hands later, Spartiat delivered the final blow, knocking puskin out in third place.

With the blinds rising pressure was mounting and, after a bit of back and forth, Spartiat successfully built on his chip lead.

29 hands into the Spin & Go and it was all over. Spartiat won a pre-flop coin flip, a flip that made him an instant millionaire.

A millionaire is born

“I dreamed about what would be if I hit and won the $1M Spin & Go, and now I got it. It was amazing, a life changing moment,” says Spartiat 04.

“I still don’t realize it, but it gives me financial security.”

Congratulations to Spartiat, and to runners up denis474711 and puskin8.