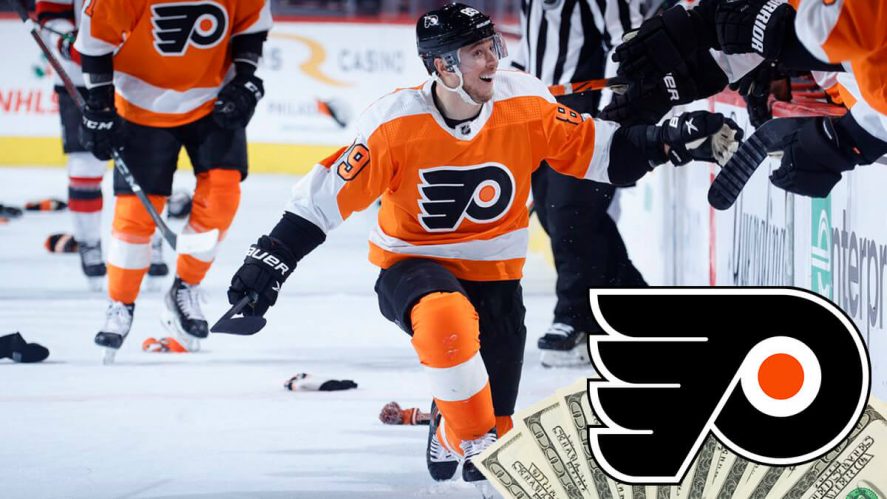 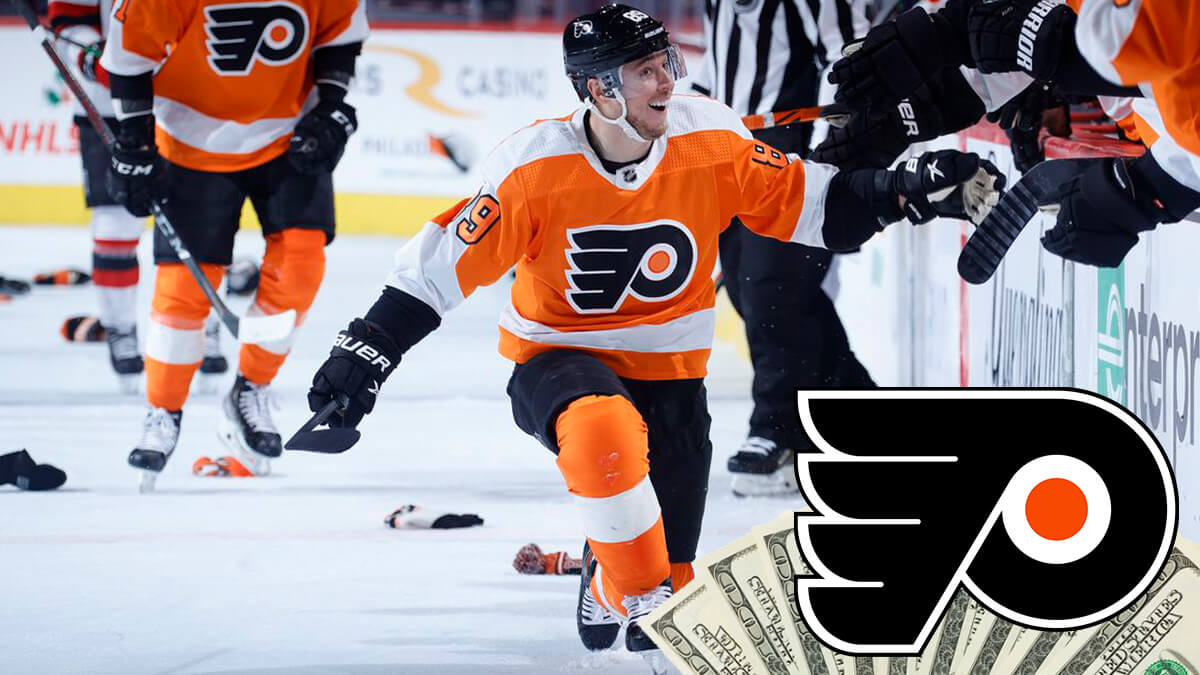 The Flyers Have Been Automatic Fades in Last 2 Seasons

This year, Philadelphia (22-37-11) sent Elliott packing and actually started off better with Jones (3.38 GAA) and new netminder Carter Hart (3.11 GAA), but the New Year 2022 rang in absolutely nothing but misery for interim Head Coach Mike Yeo and the Flyers.

Since New Year’s Day, sports gamblers betting against the Flyers at the best NHL hockey betting sites online have fared very well with Philadelphia winning just 9 games (as of April 6) and losing 30 times, with nasty losing streaks of 4, 6, and 13 games since December 30.

The issues and Losses and second straight disappointing season and after an 8-game losing streak in December, the Flyers decided to fire Head Coach Alain Vigneault—in the third year of a 5-year contract—and replaced with Yeo. And things actually got worse.

So once again, there will be no NHL Stanley Cup Playoffs again for Cam Atkinson (50 points), Travis Konecny (31 assists), and Philadelphia (55 points) which sat in 7th place in the Metropolitan Division, only ahead of the ratty New Jersey Devils (54 points).

The Flyers rank low on the Penalty Kill (76%, #24), Power Play (12.8%, #32), and Goals Against Average (3.46 GAA, #27) and Philadelphia again is an Eastern Conference team that opponents know they score against trying to come from behind to win Hockey games.

Besides being a good team to bet against, Jones (9-14-3) and the Flyers have also been a solid Over team again in this 2021-22 NHL Regular season with Philadelphia going 37-33 in the Totals market with 6 Overs in their last 8 skates as they headed into play on April 7.

Philadelphia (Off-Board to win 2021-22 NHL Stanley Cup, MyBookie.ag) has been awful on the Road (9-20-5) and oddsmakers have taken down all numbers involving Philadelphia to win the Stanley Cup and it’s hard to imagine this team improving enough in 2022-23.

Let’s look at five upcoming cherry-picked scheduling spots to bet against the Flyers in April as we wrap up the Regular Season in games that might also be good to look at betting the Totals (Over/Under) Over as the run of high-scoring games continues in the NHL.

5 Upcoming Schedule Spots to Bet Against Flyers in April

Artemi Panarin (82 points) and the Rangers (45-20-6) will head to the Wells Fargo Center in Philadelphia on Wednesday, April 13 in the last of four Regular Season meetings between these two Metropolitan Division foes (TV: TNT, 7 pm EDT/6 pm CDT/ 4 pm PDT).

The Flyers are the worst team in the NHL on the Power Play and with the Broadway Blueshirts fighting for Playoff positioning, expect a gallant effort from the visitors in this one. New York is an impressive team on the Road (22-13-2) and are sound defensively.

The Rangers are 2 -1 vs the Flyers this season, winning 4-1 when they met on December 1 in the Big Apple and MSG in the first meeting of the season. Philly also lost the second meeting on January 15 by a 3-2 score but the Flyers did just win, 4-3 in a SO on March 3.

Panarin and the Rangers have W3 of the L4 in the series and simply are the much better team with a reason to win here and a logical NHL betting pick in this spot but maybe not worth a look in the Puck Line or the Totals markets because of the Flyers slump (L5-6.)

Auston Matthews (95 points) and the Maple Leafs (45-19-6) have played excellent hockey all season in the Atlantic Division and Toronto (+920 to win 2021-22 Stanley Cup) had gone over its L10 on April 6 and should be ready to sweep the season series in this one.

In the first meeting between the two way back on November 10 in Philadelphia, Toronto shut out Philadelphia, 3-0, before doubling up on the Flyers in Toronto in the second meeting on April, 6-3, so the Maple Leafs have outscored the Flyers, 9-3 heading in here.

And expect all-star Matthews to get a goal or two in this one and the star has scored more goals than anyone in an NHL season in over a decade (Steven Stamkos, 60) and Matthews is on pace to score 65 goals as we play the last month of the 2021-22 Regular Season here.

The third and final meeting of the 2021-22 NHL Regular Season will be on Tuesday, April 19 at Scotiabank Arena in Toronto (ESPN+, 7 pm EDT/4 pm PDT), and this one may be a better betting play on the Puck Line laying the goal-and-a-half with the Home side.

The Flyers are 28-27 the L55 vs. the Maple Leafs and these two have scored much with Philadelphia averaging 3.1 gpg and Toronto averaging 3.0 gpg over that span (6.1 gpg). In the last 10 meetings, these two split 5-5 with the Road team winning 4 of the L5 meetings.

Future NHL Hall of Famers Sidney Crosby, Evgeni Malkin, and the Penguins (41-20-10) head across the Keystone State to face their bitter rivals, the flyers in the last Regular Season meeting between the two clubs on Sunday, April 24 (TNT, 4 pm EDT/1 pm PDT).

So just like the Maple Leafs five days earlier, a season sweep will definitely be on Tristan Jarry (33-13-6, 2.34 GAA), Jake Guentzel (32 goals) and Pittsburgh’s (23-9-5 on Road) minds at the Wells Fargo Arena in the City of Brotherly Love And No NHL Playoff Team.

With Pittsburgh in the hunt for positioning in the Eastern Conference Playoffs race, expect the Penguins to score first here and score often with Crosby, Malkin, Guentzel, Kris Letang (60 points) and Bryan Rust (57 points) all able to put the biscuit in the basket for the Pens.

The Blackhawks (24-35-11) play host to Atkinson and the Flyers on Monday, April 25 at the United Center in Chicago (ESPN+, Hulu, 8 pm EDT/5 pm PDT) in an inter-conference showdown and the final meeting between the two this 2021-22 NHL Regular Season.

Chicago (11-17-6 at Home) has been slumping lately after sending Goaltender Marc André-Fleury to Minnesota in March as the Blackhawks, like Philadelphia, both looking ahead to better times and the start of the 2022-23 NHL Regular Season in October.

The Flyers are 16-9 against Chicago and won the first meeting this year in Philadelphia, 4-3 and won with a 2-0 3rd Period and the Flyers have W6 straight in the series, outscoring the Blackhawks, 22-8, so this is actually a spot to bet on the Flyers at a plus.

Philadelphia is also a profitable 10-2 in the L12 meetings and the Flyers have gone 2-0 the L2 times that they have played at the United Center in the Windy City, allowing just 1 goal each time (PHIL 4 CHI 1, PHIL 3 CHI 1). So backed with Chicago’s slump, think Underdog.

But the biggest handicapping thing to know here?

Be it Pennsylvania or Alberta, the Home teams have absolutely dominated in this series, winning the L11 series meetings and also covering on the Puck Line (-1½ goals) in six straight and in 7 of the 11.

Also must-know information? Kyle Connor (82 points), Blake Wheeler (42 assists). and Winnipeg have scored 7 goals against the Flyers the L2 meetings at the Canada Life Centre and outscored the Flyers 14-3 in those two games, so another Puck Line spot.

5 Solid Scheduling With the Philadelphia Flyers in April Picks: