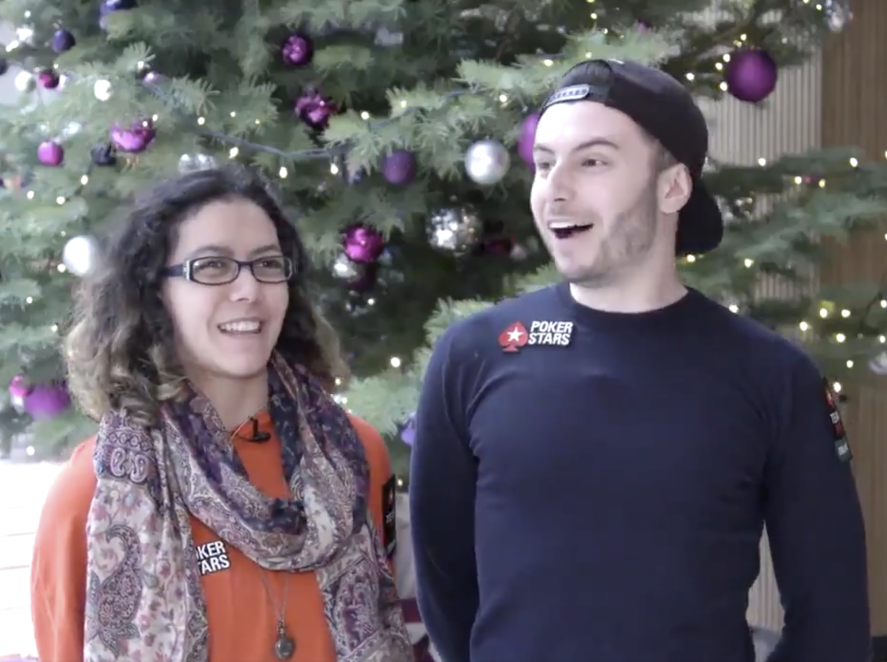 If you’ve ever thought about streaming your poker play on Twitch, there’s never been a better time to start than right now.

In the first competition–won by Ghilley and RichyRob–the prize was a one-off Platinum Pass. But this time around PokerStars has made things extra exciting:

The winner will receive a one-year PokerStars Ambassador contract!

PokerStars Ambassadors Mason “pyefacepoker” Pye and Georgina “GJReggie” James will both return as the faces of this year’s contest and will announce the winner on the PokerStars Twitch channel on December 17.

“Dare2Stream is probably my favourite project that I’ve been a part of,” GJReggie tells us. “I literally would not be in the position that I am if it weren’t for a similar streaming competition so to have the chance to watch the journey of a new crop of streamers is really fun and rewarding. I’m really excited and can’t wait to see all the folks that get involved this year!”

The last Dare2Stream competition saw entries from Lasse “WisternJL” Jagd Lauritsen, Mark “Naigo1” Foresta, and Keith “AccidentalGrenade” Becker, all of whom signed as PokerStars Ambassadors earlier this year despite not winning. This goes to show that even if you’re not successful this time around, you could still go on to become part of the team.

“It’s special as Dare2Stream brings out the best of the Twitch Poker community,” says Pye. “It’s difficult to start from the very bottom but it’s the continued encouragement and support from the other participants that make it such a pleasurable experience.”

Here’s all the info you need to enter Dare2Stream:

· Set up a Twitch stream

· Stream if you dare!

HOW DOES THE COMPETITION WORK?

HOW WILL THE COMPETITION BE JUDGED?

Throughout the competition, PokerStars will be keeping a close eye on the streams and paying close attention to the streamers that bring entertaining content, integrate themselves into the Twitch community, and show themselves to be the kind of streamer who’ll fit right in as a PokerStars Ambassador.

At the conclusion of the competition, a panel of PokerStars judges will make the difficult decision of deciding a winner. As noted, GJReggie and pyefacepoker will announce the winner on December 17 on the PokerStars Twitch Channel.

WHY SHOULD YOU ENTER?

The winner will receive a one-year PokerStars Ambassador contract. This means you’ll join all of your favourite poker streamers with your very own red spade, plus a whole lot more.

“The fact that the winner of this edition of Dare2Stream will be joining Team PokerStars for a year is truly incredible and an opportunity that should not be missed,” says Pye. “As a streamer who participated in a similar promotion before signing with PokerStars, being on the team has genuinely been a life-changing experience. I’ve had the opportunity to play, travel and work with like-minded individuals both on and off-stream with the same goal in mind to help the growth of Twitch Poker.”

“I’ve got to do things I never would have had the chance to do were it not for being part of Team PokerStars,” says GJReggie. “From doing poker commentary to attending my first European Poker Tour (EPT), doing big giveaways for the community or playing my first ever $5K. It’s exciting because there’s always something going on and you never know where it might lead to!”

ADVICE FOR THOSE ENTERING DARE2STREAM

“Be prepared, keep it clean, and have all the basics: A simple overlay, some basic alerts, a bio, add a few panels, things like that,” says GJReggie. “There are loads of resources out there where you can get these Twitch assets for free.

According to GJReggie, going live for the first time is the hardest part. Once you’re past that, you’re rolling.

“Take a few deep breaths, close your eyes, and go for it,” she says. “It doesn’t have to be perfect! Don’t worry about making mistakes. It’s live streaming, you get hiccups and tech issues, it happens.”

And don’t forget to get involved in the Twitch poker community.

“I would not have made it to where I am were it not for the help of other streamers,” says GJReggie. “I know it’s a competition but I really hope the contestants work together, build each other up, help each other out and grow together.”

But most of all: ENJOY IT.

“Have some fun with it,” she says. “Be yourself. Streaming is a really great way to get involved with the Twitch Poker community, meet people, make some new friends, and have a lot of fun playing poker, so I hope more than anything that you enjoy the experience.”

Check out: 6 essential things you need to start streaming poker on Twitch