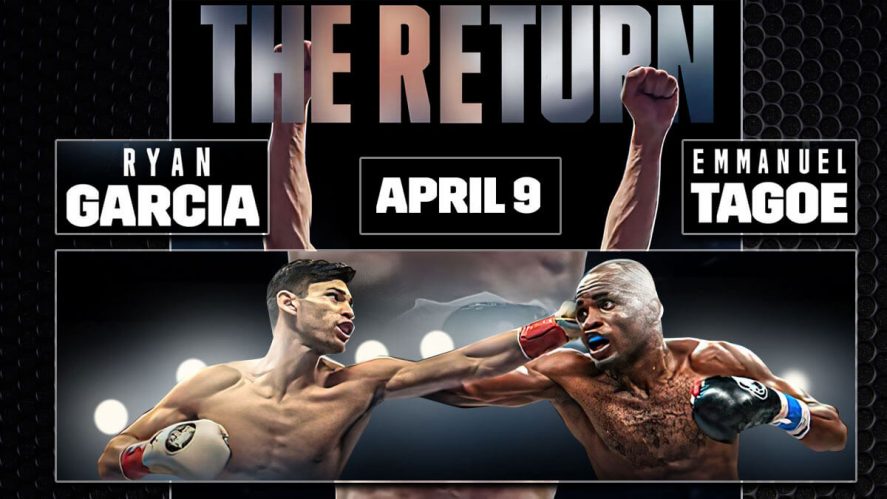 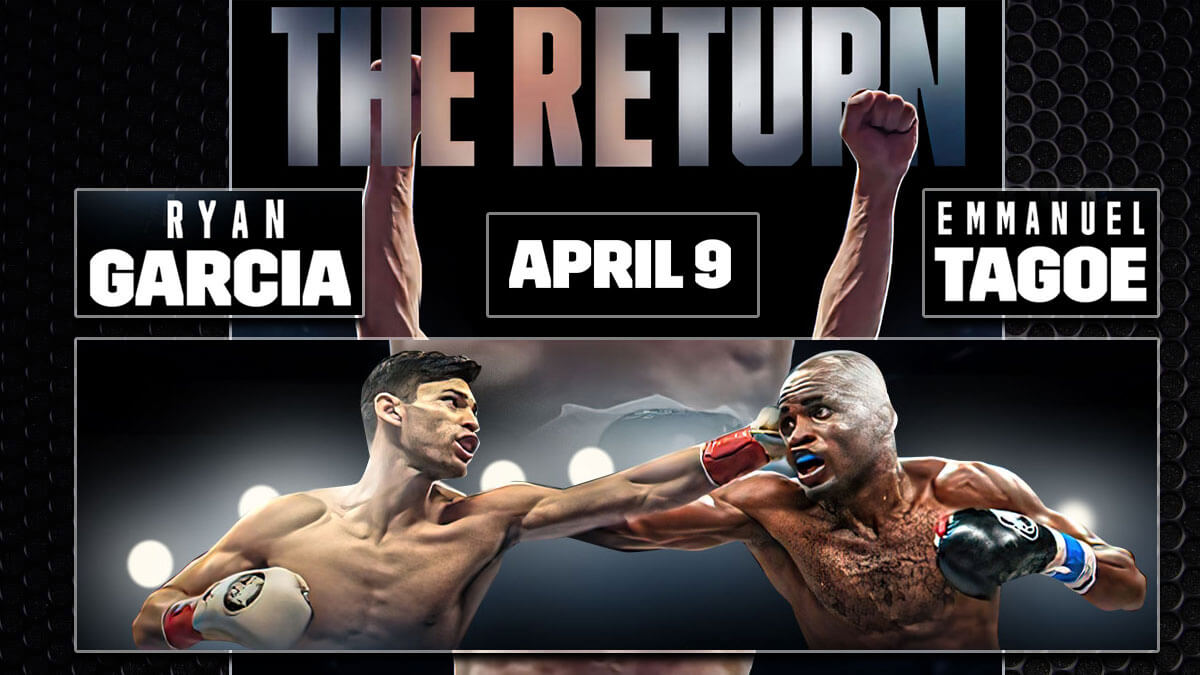 One of the most exciting young stars in boxing is finally set to make his return to the boxing ring this weekend. 23-year-old Ryan Garcia is looking to earn the 22nd-straight win of his professional career against the highly underrated, Emmanuel Tagoe. Today, I’ll be providing an in-depth Garcia vs. Tagoe betting pick and odds breakdown.

This is a huge fight for boxing’s lightweight division. Ryan Garcia remains a huge star, yet inactivity has led some to question his devotion to the sport.

Here’s what you need to know about this exciting bout!

The bantamweight division in boxing is more exciting now than it ever has been in the past. Elite fighters from around the world are now competing at 135 pounds. Perhaps none has captured fan interest quite like Ryan Garcia.

Ryan is set to take on a very experienced opponent this weekend. Emmanuel Tagoe wants to prove he is the more superior boxer and fans around the world are now looking to make their last-minute bet on this matchup.

Below is a look at the odds for this fight, courtesy of BetOnline.

Ryan Garcia’s last fight was the best of his career. He has not fought since January of 2021, however, leading some to predict he would come into his next bout as an underdog. That is not the case.

Garcia is entering this bout as the -1500 favorite. He is a serious knockout puncher with the vast majority of his fights ending before going to the judge’s scorecards. Another win for Ryan will establish himself as one of the top dogs in the lightweight division.

Emmanuel Tagoe is a very talented fighter, yet has not managed to break out as a true star in the sport. He is coming into this bout as the +800 underdog by nearly all online sports betting sites. That is likely due to the fact that he does not hold wins over any of the truly elite fighters at 135 pounds.

Unfortunately, over/under odds for this bout have not yet become available. That is likely to change as the fight draws closer. Considering the knockout ability of both fighters, it would not be a shock to see this fight ending in the early rounds.

Many fans will see these odds and instantly form their own Garcia vs. Tagoe betting pick. I never recommend making a fight prediction based solely on the odds, though. Oftentimes, underdogs have real opportunities to win, even if the odds write them off.

Below is a look at some of the most important statistics these fighters are bringing with them into the ring.

Even the most successful boxing betting experts will agree that forming a prediction on a high-level fight is not an exact science. The goal is to look at as much information as possible to form the most accurate pick. That includes comparing some of the physical and career statistics that two fighters bring with them into fights.

I recommend looking at these types of numbers for the upcoming fight between Ryan Garcia and Emmanuel Tagoe. There are some very interesting comparisons that fans will discover.

Below is a look at some key figures surrounding Saturday’s big lightweight main event.

This is one of the most intriguing lightweight fights booked so far this year. Many fans remain skeptical of just how good Ryan Garcia really is. An impressive win over Emmanuel Tagoe will certainly shed some light as to how he might fare against the very best fighters at 135 pounds.

Each of these fighters has some unique physical advantages. Garcia stands two inches taller than Tagoe. Emmanuel has a five-inch reach advantage. It’s difficult to say which of those advantages will have a greater impact on fight night.

The experience advantage leans in Emmanuel’s favor. He has fought 12 more times than Ryan Garcia, yet most of those bouts came in his home country of Ghana against lesser competition and that helps to explain his status as an underdog by all boxing betting sites. Ring time is a valuable advantage, though, and there is no denying that Tagoe has fought more times as a professional.

Incredibly, Ryan Garcia has more knockouts on his resume than Tagoe. He has a staggering 18 knockout wins out of his total 21 victories. That is a far better knockout ratio than the 15 knockouts to 32 wins Tagoe is bringing into this bout.

How much do these numbers really mean? It’s difficult to say. I am not forming my own Garcia vs. Tagoe betting pick based on the stats above and instead want to predict who’s skills will prove to be superior on fight night.

Below is a look at what I feel both fighters will be trying to accomplish this Saturday.

Ryan Garcia burst onto the professional boxing scene in 2016 and quickly turned into one of the most-talked-about fighters in the sport. His social media skills were apparent and he turned into a star across his various online platforms. It was his performances inside the ring that truly made him a star, though.

I feel that Ryan once again wants to score a devastating knockout victory. He is one of the best counter punchers in the sport and that could bode well for him if Tagoe gets too aggressive. If Emmanuel chooses to remain on the outside, Garcia needs to lunge forward with his massive body shots as he did so effectively against Luke Campbell. A fairly common Garcia vs. Tagoe betting pick is on Ryan winning via knockout with a shot to the body.

That ability to fight defensively and offensively is what makes Ryan such as dangerous fighter. Tagoe is an aggressive fighter and that cold allow Garcia to land one of his trademark left hooks to earn the knockout. If he gets Emmanuel hurt, expect to see him swarm with combinations to earn a TKO win.

This is a massive opportunity for Emmanuel Tagoe. He is in need of a win over a big-name opponent to earn a shot at a major world title in the future. A solid win over Ryan Garcia will likely be enough for him to earn that shot. Tagoe is saying all of the right things leading into fight night and even claims that Ryan Garcia is scared leading into this exciting matchup.

Expect to see Tagoe moving forward cautiously behind his jab and quick combinations. He loves to land good punches to the head and body of his opponents while inside close range. That willingness to put himself in danger to land shots has made him a fan favorite amongst hardcore fans around the world.

Pressure will be key for Emmanuel. Luke Campbell proved that Garcia can be knocked down when pushed against the ropes. He cannot get too aggressive, however, as it could lead to him getting caught. Calculated aggression behind a quick jab will help Tagoe steal rounds and could even allow him to land a knockout later in this fight.

Ryan Garcia needs a win here to prove his supporters right. He also is in serious need of a victory to prove his doubters wrong. He is facing a very tough opponent in Emmanuel Tagoe, yet the oddsmakers still have Ryan as a major betting favorite leading into fight night.

I have gone back and forth forming my own Garcia vs. Tagoe betting pick. A part of me feels that Tagoe has what it takes to pull off the major upset. In the end, I decided that the oddsmakers chose the right fighter in this one.

Ryan Garcia is one of the hardest hitters in the lightweight division. I believe that his counter-punching skills will make a difference in this bout. He should be able to score a knockout as Tagoe pushes forward with his heavy combinations.

That aggression from Emmanuel Tahoe is what will cost him. Fighters need to find the perfect balance of aggression and defense to earn a win over Ryan. Tagoe excels in the aggression department, yet his lack of solid defense will lead to him getting dropped and finished against the ropes in the third round.

Not many fans are likely to completely disagree with my Garcia vs. Tagoe betting pick. Ryan Garcia is a very tough fighter with some of the best power at 135 pounds. This victory should earn him a shot against one of the legitimate champions at 135 pounds in the future.

Make sure to head over to BetOnline to check out a full list of odds for this bout. Don’t forget to look at the unique prop betting odds for this matchup, too! Feel free to take a look at my in-depth betting pick for the UFC main event this Saturday here, too.

What do you think of my Garcia vs. Tagoe betting pick? How do you see this fight ending? Let me know in the comments section below.