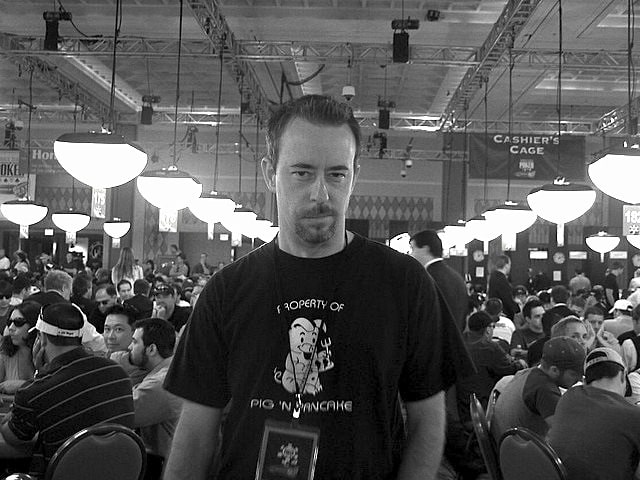 You know who I’ve always found dull? The guy who makes me cringe more than almost anyone?

It’s the guy who doesn’t stand up when his time in a poker game ends. His chips are gone. The floor has already taken his seat card. The vast majority of people at the table have already forgotten the guy’s name.

But there he sits. Staring at the table where his chips used to be. Doing mental math and counting off percentages on his hand like his fingers were abacus beads and he a cursed modern-day Archimedes. He might even tell a story about the hand he just played, a story you just witnessed, have not yet forgotten, and about which you do not need a retelling.

And even when our guy stands, he lingers, maybe angry, maybe wistful, maybe still talking and mumbling about math, or fate, or the dealer’s family. The guy might be there for another hour if someone doesn’t come and move him along, show him the door, or physically remove him from the property.

I hate that guy.

Anyone who has been in the game long enough knows there are only a few acceptable and polite ways to leave a poker table. The one I adopted many, many years ago: stand up quickly, very briefly acknowledge the rest of the people at the table with a nod, and say, “Good, luck.”

This works well for me, because I’m terrible at goodbyes. I hate it when something good is over. When I was a child, I cried when my favorite holiday cartoon special ended every year, because it was over and no one told me YouTube would be invented someday. I hated the end of every school year, every graduation, and every breakup with a girl. This eventually translated to the rest of my life. I hated the end of a fun night, a great concert, or a long kiss. If something had been good, I hated ruining it with something as terrible as a goodbye.

Brad Willis, pretty much where it all started with the PokerStars Blog, at the WSOP in 2005.

I became one of those people who would ghost before people started calling it “ghosting.” I started practicing the quiet slip-away when I was young, and now that I’m old, I’m so good at it that I sometimes wonder if I’m not actually a ghost.

So, my genetic makeup told me I wasn’t going to be writing this missive. One day I’d be here, and one day I’d be gone. Good game, and all that.

As it turned out, there was only one condition applied to what is today effectively the end of my time with PokerStars and the PokerStars Blog: I had to say goodbye.

Brad working the LAPT Grand Final in Sao Paulo. Brad was instrumental in creating the live coverage of all PokerStars events from around the world.

I’ve been doing this long enough now that I’m closer to furniture than I am the future of poker. In the rare moments people mention me, it’s likely much like they’d mention the first bass player for a touring band that’s turned over a few times.

“Brad Willis…yeah, didn’t he play with Skynyrd back when they were calling themselves ‘My Back Yard?’”

But this blog thing you’re reading was my idea about 18 years ago. With the support of some smart people who trusted me, I created the PokerStars Blog and helped build it into what it is today. I never planned to do it. I was a TV news reporter who was known for investigating crime stories and chasing bad guys through the mountains. When PokerStars asked me to join them in their own traveling circus, I thought it’d be a fun time and maybe last for a year. I was 31 years old then. I’m 48 years old now. I can confirm it was a fun time, and many times have wondered how my body managed to last a year….let alone nearly 18.

Brad created the PokerStars Blog after a career as a TV journalist… which proved perfect for appearing on camera at live events.

The guy I hate would stand here and tell you all the best and worst stories from those 18 years. That guy would tick off the countries and plane trips on his fingers. He’d tell you about the birthdays he missed and all the funerals he attended. The sinners. The saints. The sober and the sots. He’d thank each person who ever did him a kindness and skewer every 2+2er who ever got more joy from trolling than they did playing poker.

But, hell, it’s taken me 700 words to even get to the point where I’d start being that guy I hate so much. It would take me 10,000 words to actually say everything I’d want to say, thank everyone I’d want to thank, and offer a few favorite anecdotes. As a wise woman named Sweet Brown once said, “Ain’t nobody got time for that.”

Brad Willis calling the shots at the PSPC in the Bahamas back in 2019.

Short and sweet, here it goes:

If I were gonna carve a message in the trunk of the poker tree before I dragged myself away, it would be this:

Isai Scheinberg belongs in the Poker Hall of Fame
If it weren’t for the people, the poker would be too boring to be popular, and if it weren’t for the poker, the people would never show up.
When you’re in a live game, wash your hands before you leave the restroom. Those suited connectors you were going to go bust playing will still be there after you’ve had the self respect to not act like a slobbering animal with no home training.

That’s it, folks. Enjoyed it.