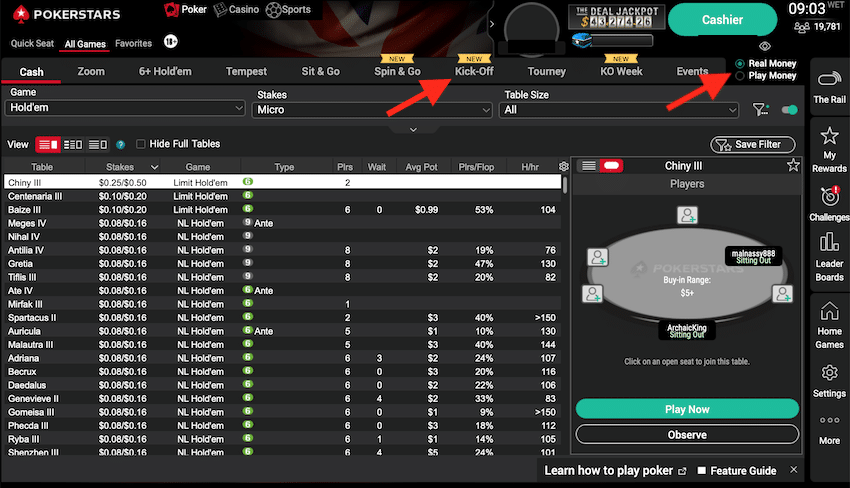 PokerStars recently launched Neymar Jr’s “Kick-Off” game — a reworking of the popular Grand Tour format, this time built around the superstar Brazilian soccer player. Kick-Off ticks all the boxes demanded of most low-stakes recreational players. It’s quick, fun and contains a number of built-in bonuses that can turn a meagre buy-in into a grand payday.

If you haven’t given it a crack yet, here’s a step-by-step guide to joining the fray. It’s really very easy indeed.

1. Kick-Off is located in the main list of games at the top of your screen, so get started by clicking there. There’s a real money and a play money version, so make sure you’ve got the right box selected in the top right (see fig. 1). This brings you to the Kick-Off lobby, which already looks different from what you might be used to.

2. Kick-Off is a series of single-table bounty tournaments, called matches, through which you progress up the soccer field towards goal, leaving opponents trailing in your wake. Your aim is to replicate the kind of mazy dribble that characterises Neymar’s presence on the pitch. In this poker version, if you win a low buy-in match, you qualify for the next step with a higher entry fee, paid by what you have already earned. If you “complete” Kick-Off and score a goal — ie., win all the matches — you get a significant payout, of which more later.

The lobby here looks like a soccer pitch, complete with bright lights and cheering crowds (see fig. 2). Neymar’s solo run takes you from the edge of his own penalty area, at the bottom left, past a number of challenges, to the edge of the other box and a spectacular overhead kick that leaves the goalkeeper flailing. Along this route, you’ll see a number of check-points, labelled with a cash value — from $1 through $2, $5, $12 and $25. These represent the various buy-ins for the single-table tournaments. Many players will want to start at the $1 level and then move up and up and up, but it’s worth remembering that you can start your tour and buy in at whatever level you choose.

Click one of the buy-in values and you’ll soon be seated alongside three other players who are similarly prepared to pay that buy-in to play — either starting their Kick-Off game afresh, or having qualified to that step.

Remember, if you don’t win a tournament, your solo-run over. You need to start this process again.

It’s also worth noting that you only pay your 10 percent rake at the entry level you choose. So if you buy-in for $1, you pay 10 cents. If you win the sprint and move up to the next level, you enter that second sprint rake free.

3. Each match along the way is played as a four-handed hyper turbo sit and go, with a progressive knockout bounty. All of those elements are significant and combine to make Kick-Off unique.

Firstly, the four-handed table means you only ever have a maximum of three opponents. That’s one more than you’re used to encountering in a Spin & Go, but at least two fewer than most ring games.

Secondly, the hyper turbo structure means that blinds rise very rapidly indeed. You’ll be short-stacked in next to no time, whether or not you’re winning pots.

Finally, the PKO element means that there’s a bounty on everyone’s head from the very start. Half of the buy-in for a particular sprint goes into the bounty pot. You can win money every time you knock out an opponent, but they can also win money for knocking you out, so it quickly becomes a dog eat dog world.

Your ultimate aim is to build your personal value to $50, at which point you can cash out — claiming your own bounty, as well as all the money you’ve won for knocking out other players. This will typically happen when you win the $25 buy-in match — and score the goal to “complete” Kick-Off.

4. As you are playing one of the matches, you can assess the progress of all the players. The value of any player’s bounty appears beneath their username, and if you click the small dropdown symbol beside it (see fig. 4), you can see the reward on offer for knocking that player out. You’ll notice that the reward is displayed as a range. That’s one of Kick-Off’s bonuses: the bounties are randomised and will sometimes be multiplied many times over, until they are worth many times more than the stakes you’re playing.

You only find out specifically how much a bounty is worth once it’s awarded. (Full details of Kick-Off multipliers can be found in the tables at the bottom of the Kick-Off page.)

As with all PKO tournaments, your bounty value increases incrementally the further you get. You bring a new bounty total to every table you join, and your new opponents will have similar prices on their scalps.

5. If you win a match, you move Neymar up the pitch towards the goal. If you feel that you’ve got some momentum behind you and you want to ride the wave, you can play the next sprint immediately. However, you’re also able to take a breather and restart your tour from this point whenever you feel like. It makes Kick-Off really useful if you’ve only got a limited amount of time to play.

You will note that as you get further up the pitch, you will be matched against players who have a similar sized bounty as you — similar, but not necessarily exactly the same. That’s because everyone will emerge from previous matches having won slightly different bounty values. The relative real-money value is reflected in the number of chips each player gets at the start of the next match.

6. Your ultimate goal is to get your value beyond $50 at the end of the whole match. As and when this happens, you can cash out your own bounty plus any others you have won. With the multipliers in place, you could be on for a sensational payday.

As with all new formats, the best way to get to grips with Kick-Off is to try it out and see how you go. There are many learning resources available already, including from PokerStars Learn’s Pete Clarke, whose course was written when this was still Grand Tour.

Time to strap on your boots and get playing!

Note: This is an updated version of a post that previously appeared under the title: “How To…Play PokerStars Grand Tour“.