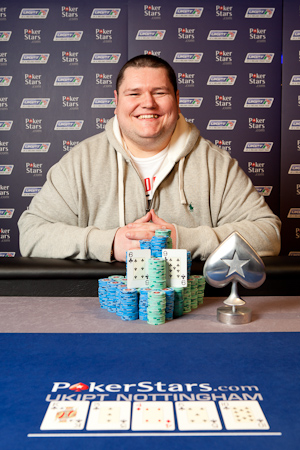 European poker enthusiasts are already packing their bags: the latest stop on the United Kingdom and Ireland Poker Tour (UKIPT) gets started this week. The destination this time is Nottingham, specifically the Dusk Till Dawn Poker Club, where there’s a £1,000 buy-in Main Event and all the assorted fun of the British Isles’ leading poker tour.

If you’re on the fence whether to head to Nottingham, allow us to persuade you.

1. MORE THAN £1 MILLION IN GUARANTEES

Ever since its inception in 2010, players have flocked in great number to the UKIPT and vast prize pools are guaranteed. In case of unexpected surprises, PokerStars is literally guaranteeing that will be the case in Nottingham this time, whacking hefty guarantees on all of the flagship events.

With all that money guaranteed, final table players will be certain of a significant payday. Past history suggests the winner won’t need to be slogging it out at the office for a good few months at least.

2. GIVEAWAYS AND ACTIVITIES: ALL THE FUN OF THE UKIPT

The UKIPT has always been about more than just the poker, with players, friends and family pointing to one of the most friendly atmospheres on any poker tour. While poker players will always find one another in the bars and restaurants to talk through hands and discuss strategy, there are also plenty of opportunities to unwind and enjoy time away from the tables.

In Nottingham, these include:

Become champion of the track

If high stakes tournament poker isn’t high octane enough, why not join the GoKarting Grand Prix at Nottingham’s sensational Team Sport Karting track? Speeds can reach 40mph on the multi-level 750m state of the art track. As poker players, you should be well prepared for the hairpins, chicanes and other tight corners, as well as hair-raising straights.

The track has been booked specifically for use by racers registered through the UKIPT, and the driver recording the fastest lap time will win a Mini Spade trophy.

The PokerStars Players’ Lounge will be the perfect place to enjoy some down time from the intense competition of the UKIPT — and if your frustrations boil over, you might even fancy putting on a VR headset and blasting away at some space pirates.

The VR games will be running throughout the festival, and for a couple of hours from July 27-30, PokerStars staff will be on hand to register scores on the Space Pirate Trainer game.

The person recording the top score will get a Mini Spade trophy, while the top three will also qualify for the exclusive sit n go for Sunday, described above.

If you’re heading to Nottingham, leave room in your suitcase, because you’ll likely be coming back with more clothing than you arrived with. As ever at a PokerStars live event, we have heaps of merchandise to give away — some just for turning up, and even more for answering a survey and spinning the wheel, where everybody wins a prize.

All UKIPT players will get exclusive UKIPT patches, pins and card protectors.
All UKIPT Main Event players will also get exclusive T-shirts celebrating the event.
All online qualifiers to the Main Event will get all of the above, plus a UKIPT hoodie, lanyard and a drawstring bag.
There are also baseball caps on offer via various giveaways at the activities.

Spin the Wheel for bonus giveaways

Complete a short on-site survey and you’ll be invited to Spin the Wheel to receive additional merchandise and prizes.

Top prizes include hoodies, a free 20-minute massage, or a €33 online satellite ticket. There are also drawstring bags, T-shirts and baseball caps, as well as card protectors, decks of cards, and satellite tickets worth €5.

There’s a prize every time.

Top ranked players from the various activities hosted at the UKIPT will book their place in an exclusive hyper turbo Sit n Go, played out at 11am on Sunday, July 31 (i.e., the final day of the UKIPT festival).

Victoria Coren Mitchell is a fan of Dusk Till Dawn

The writer and broadcaster Victoria Coren Mitchell — also a double EPT champion, of course — played UKIPT Nottingham for the first time in 2010 and wrote about it in her column in the UK’s Guardian newspaper. It was the first time she had visited the Dusk Till Dawn poker club that hosted it, and she liked what she saw. “What a great club it is,” Coren Mitchell wrote. “Big, airy and comfortable, with lots of parking and a nice bar. It may be the best poker venue I have seen in the UK.”

If anything, things have only got better at Dusk Till Dawn, which is now well accustomed to hosting huge field poker tournaments. The club was created by poker enthusiast Rob Yong, who consulted with countless poker players about their wishes and expectations for a poker club, and then laid it on.

Additionally, the tournament staff — dealers and floor personnel — will bring with them years of experience working at events such as the EPT. It’s a smooth running, efficient machine, offering the best player experience in world poker.

4. PLAY SIDE EVENTS AND CASH

The four tournaments detailed above — the Main Event, High Roller, Super High Roller and UKIPT Cup — will understandably be the main focus of most players at the UKIPT. But that’s certainly not the end of it.

The full schedule for UKIPT Nottingham 15 events, including qualification, with buy-ins starting at £230.

There’s the UKIPT Mini, for example, with a £230 buy-in, three starting flights and £100,000 guaranteed. There’s a PLO event on Friday July 29 and there’s also a bounty knockout tournament, on Sunday July 31.

Look at the full schedule and you’re sure to find something that takes your fancy. And with so many tournament players in town, the cash tables will also be busy.

5. TO PREPARE FOR THE ROAD TO PSPC

The Road to PSPC will bring PokerStars players back to Nottingham

Not long after the UKIPT departs Nottingham, PokerStars players will return once more. That is for the Road to PSPC tournament, which takes place at Dust Till Dawn from August 25-29, 2022.

In case you’re in the dark, Road to PSPC tournaments have one unique, spectacular element: there’s a Platinum Pass added to the winner’s prize. The buy-in is around $400 or equivalent (in Nottingham, it’s £340), but the Platinum Pass alone is worth $30,000.

That’s right: a £340 buy-in tournament has a $30,000 ticket added as a bonus prize — and that’s just the start of it. The Platinum Pass offers buy-in and expenses to the PokerStars Players NL Hold’em Championship (PSPC) in the Bahamas next January, where the first prize might easily be more than $5 million.

So why not treat the UKIPT Nottingham as a tester run for a return a month later for the Road to PSPC event?