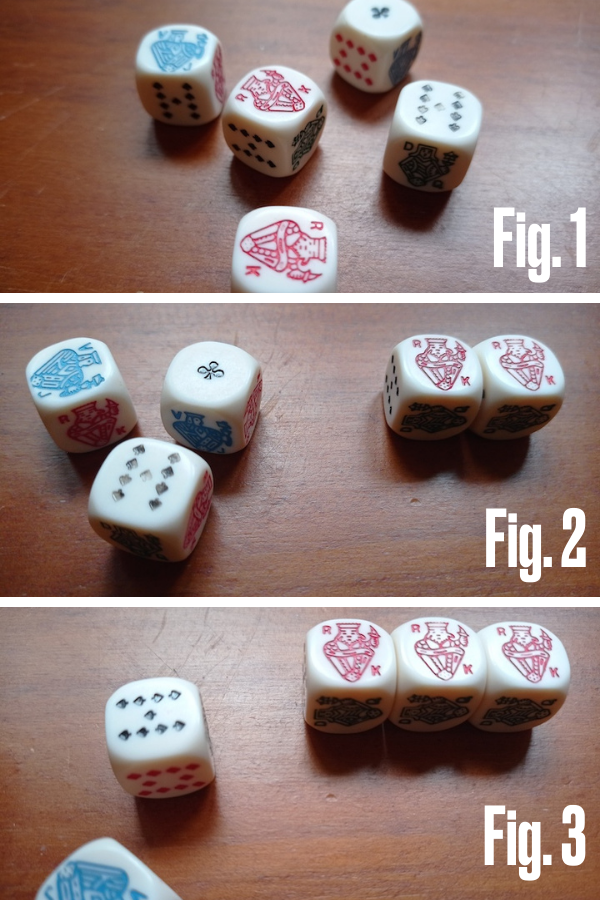 We take a look at an old game that seems like poker, except with dice instead of cards. Welcome to poker dice.

WHAT ARE POKER DICE?

If you open up a well-stocked games cupboard — let’s say the kind you might find in an opulent old mansion house with thick carpets, secret passageways and guests carrying guilty secrets — you might find a set of unusual looking dice. Instead of numbers, they have playing card symbols on their sides: an ace, a king, a queen, a jack, a 10 and a nine.

These are “poker dice”, and you can use them to play a game of the same name.

If you’ve played draw poker and/or Yahtzee, you’ll quickly come to the conclusion that poker dice is a combination of the two. In fact, despite a name suggesting an ancient Asian heritage, Yahtzee was developed in Canada in the 20th century, based on poker dice.

So by learning how to play poker dice, you’re essentially learning where one of your old childhood favourite games came from. And you’re adding another fun entry on your list of poker games.

HOW TO PLAY POKER DICE

The idea of poker dice, much like any kind of poker, is to make the best “hand” possible. We don’t have cards in poker dice, but the idea is to make a poker hand using the symbols on the dice.

With only six sides on each die, there are far fewer combinations of hands available to players, and the symbols on the dice also do not have suits. So we’re restricted to the following hands, almost all of which have an exact equivalent in poker:

The exceptions are at the top and the bottom. Five of a kind is precisely that: five dice showing the same symbol. And “bust” is the name given what we’d call a high-card hand in poker, i.e., five symbols without any matching at all.

As in poker, the player with the best hand wins.

The game needs a minimum of two players. The first player rolls all five dice simultaneously and sees what symbols land face up. He or she can then choose to keep any of the five dice, putting them to one side, and re-roll the remainder.

In the picture (fig 1), you can see that the first roll produced two kings, one ace, one jack and one nine. The player decided to keep the two kings and re-roll the other three dice.

After the second roll, the process then repeats. The player can choose to keep any of the re-rolled dice, placing them with the kept dice from before, and rolling the remainder. In our example, the player rolled one more king, which he kept, and rolled the other two again (fig. 2).

No more rolls are permitted after the third. The player then looks at all the dice and makes the best five-dice hand from the symbols showing. In our example, we didn’t roll any more kings. So our best hand is three-of-a-kind, kings (fig. 3).

The dice then pass to the next player, who has three rolls to make a hand. In our example, Player 2’s first roll brings a king, queen and jack, which she keeps. She then rolls an ace on the second roll, and a 10 on the third. Player 2 ends with a straight — i.e., five symbols in sequence.

A couple of quick additional rules:

If a player rolls a strong hand on their first or second roll — let’s say, they immediately roll a full house — they are permitted to surrender their subsequent rolls. It’s not mandatory to roll three times, if you wish to roll fewer.

If the player wants, he or she can re-roll any previously “kept” dice on a subsequent roll. For instance, if you kept two queens on the first roll, but the your second roll had a ten, jack and a king, you might want to keep one queen, along with the 10, jack and king, and roll the other queen, which you kept the first time, in the hope of getting a nine or ace.

It’s not easy to implement incremental betting in poker dice because each player takes their turn in full before the dice pass to their opponent. You can’t bet on flop, turn and river, so to speak.

Instead, any betting is simply done before the rolls commence — every player paying some kind of ante — with the winner scooping everything at the end of the round.

You might even just want to play poker dice without betting. It’s a good way to introduce some basic poker concepts of hand ranking to new players, without scaring them off.

It’s similar to playing poker online. You can do it for play money for free.

If you’re looking for a slightly more complicated variation on poker dice, with potential for more bluffing and betting, then think about “Liar’s Dice”. We’ll probably cover that some time in the future, but in the meantime, Google is your friend.