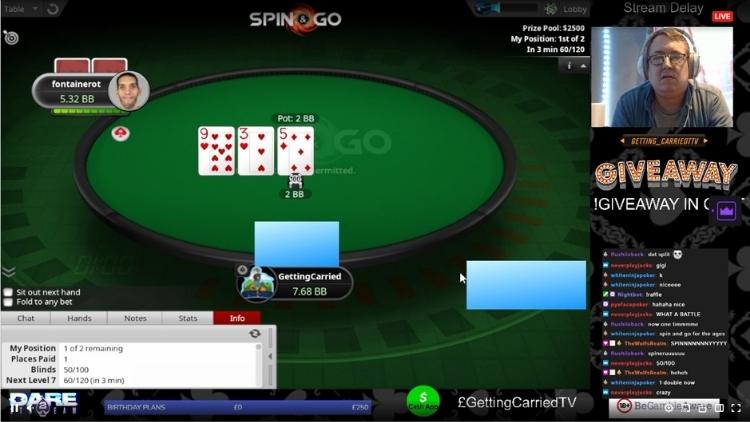 This isn’t the biggest story you’ll read of someone turning nothing into thousands of dollars.

But to the low stakes player making their biggest ever poker cash, none of that really matters.

At least that’s the impression we got from low stakes streamer GettingCarried earlier today who turned a free $500 PokerStars Spin & Go ticket into $2500, and a story that’s still appearing in Dare2Stream chat boxes as you read this.

$500 Spin & Go’s are not the usual domain on GettingCarried, an amateur poker streamer from the UK, who earned the ticket in a PokerNews giveaway. That many zeroes to the left of the decimal point put this well and truly at the high stakes end of his poker career so far.

Were it not for frequent sips on a Lucozade bottle, he was hiding his nerves well when he logged in this afternoon, fired up his Dare2Stream channel and waited the short time it took for the vacant seats to fill.

Not that his rail cared about any pre-match nerves. They were too excited for him. They may have only numbered a dozen or so, including Mason Pye, but they were resolutely, and vocally, on his side. And not just because as a nod to good karma he’d promised that if he won, he’d put one of this chat followers into the Big 20 Finale next month.

Suddenly everyone was taking nervous swigs on bottles.

Things getting tense heads up

As a third player took a seat the Spin began, landing on $2500. That was another bonus.

There were more swigs on the bottle as he tried to keep up with the chat and prepare to play his A-game. But something would have to give. He went quiet.

Very quickly three players became two. The dominant player in the early stages knocking the other out and turning to play heads up with GettingCarried’s short stack.

Kings earned one double up and a short respite. But the nature of Spin & Go’s is that they’re fast and relentless. His stack dwindled to as low as 2.9 big blinds before he earned a couple double ups with the type of hands that would make any player nervous.

Suddenly though a risky looking King-Three stood up to nine-eight suited.

He was, and things would stay that way.

The final hand went as fast as it took to screen shot his reaction, which you can see below.

“That’s the biggest ever cash in live poker and live,” he said, his hands on his head as if he thought it might fall off. “I genuinely thought I was done.”

He allowed himself to take a quick peek at his new balance, then covered it up again. It might not be real if it was on full display.

But it’s real all right, and not bad for about nine minutes of poker.

GettingCarried is one of hundreds of players taking part in our Dare2Stream contest. All of them have a story to tell. This is just one of them. Go check them out.