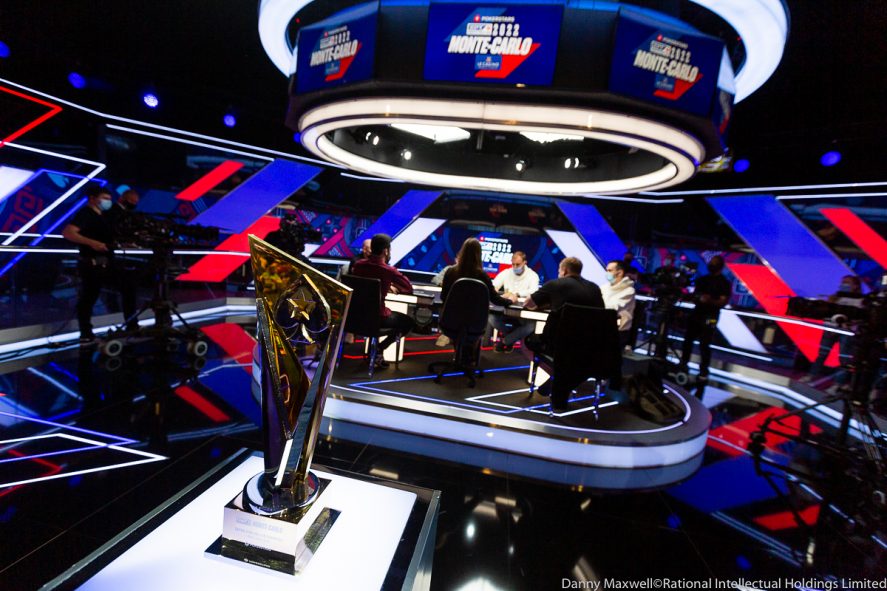 Adrian Mateos is one of world poker’s greatest talents: a superstar from the moment we first set eyes on him, age 18, when he won a title on the Estrellas Poker Tour, and soon after won the World Series of Poker Europe for his first €1 million score.

Since then, Mateos has won three more WSOP bracelets among numerous other major tournaments, including the EPT Grand Final here in Monte Carlo in 2015, the first time a Spanish player ever triumphed on the EPT.

Tonight Mateos stood on the same spot on the same stage as that huge EPT triumph, this time collecting the trophy for the €100K EPT Super High Roller event. It came with a prize of €1,385,430 and pushed his career earnings to €27 million. It further consolidated his position as Spain’s leading poker light.

“It feels amazing,” Mateos said. “This is a lucky place for me. I always have really good results here, so I’m happy to come.”

Mateos was the chip-leader at the start of the day, when only six players remained from a starting field of 42 entries, and he never lost that position through the little more than four hours it took him to complete the job. Few players make this game look quite so easy, but when Mateos has chips, there’s practically nobody who can take them off him.

When asked whether he agreed with people who listed him as the best player in his country, maybe in his continent, Mateos said, “Of course it feels amazing that people say that. I consider myself one of the best, because if not, I wouldn’t play these 100Ks. But I keep working really hard to keep winning again.”

Everyone in contention for the EPT Trophy

Mateos would have been the first to admit that there was a considerable imbalance at the start of the day, where the most experienced player at the table, Mateos himself, also had all of the chips. His closest two challengers in terms of experience, Mikita Badziakouski and Marius Gierse, were the two shortest stacks, while the player with the second-biggest stack, Kent Staahle, was also by far the least experienced.

This dynamic was significant because while Badziakouski knew he did not need to get involved too early, knowing all about ICM, and Gierse managed to pick his spots and chip up early, Staahle attempted to grab the bull by the horns. He played multiple big pots, lost nearly all of them, and then made a big check-raise shove with pocket nines on an eight-high board.

The businessman perhaps felt that he didn’t want the table to run him over, but when he took that stand, Gierse, who now had him covered, had pocket aces and snap called. Staahle’s hand did not improve and he was out in sixth, cashing for €285,240.

Staahle’s Icarus moment meant a ladder up for Laszlo Bujtas, the Hungarian high roller regular, who had similarly suffered in the early stages of the day and had dwindled to fewer than 10 big blinds.

Bujtas got those chips in not long afterwards, with A♥5♠ from the small blind. Mikalai Vaskaboinikau was in the big blind and made the call with J♥10♠ and ended up making a broadway straight. Bujtas won €366,740 for fifth.

After that hasty start to proceedings, everyone had a decent sized stack and they were all now able to play some proper poker. That kind of situation suits Badziakouski, who is one of the most accomplished players in the world game, and he duly chipped up. Mateos continued to hammer away with his chip lead, and Gierse continued to pick his spots judiciously.

This put the most pressure on Vaskaboinikau, whose stack was eventually shortened by the increasing blinds. He tried to manoeuvre his way to a double with a few shoves, but his opponents usually folded, until Mateos eventually found J♥10♦ in the small blind and open-pushed. Mateos had 10 times the stack of Vaskaboinikau, in the big blind, but the Belarusian player made the call, correctly, with K♠7♣.

However, a jack on the flop, and no further cards of significance, meant more for Mateos and an elimation for Vaskaboinikau. His fourth place earned him €468,610.

Mikalai Vaskaboinikau: A fist-bump from the champ after finishing fourth

Vaskaboinikau’s elimination meant only one player from Belarus remained, but it was the country’s very best: Badziakouski. He had built from his short stack to be right in contention, and was the central figure in arguably the most thrilling hand of the day. In it, he opened from the button with ace-king, saw Gierse three-bet from the small blind with ace-ten and then Mateos cold four-bet from the big blind with pocket kings.

The cogs started whirring in Badziakouski’s brain, and they whirred through nine time-bank cards, before he landed on the decision to fold. It was the right play, and underlined his excellence. (He also managed to get pocket twos to beat pocket sixes earlier in the day to double up, proving that in poker, sometimes even the “wrong” decision can be right too.)

However, Badziakouski took a rare misstep when a big bluff went wrong in a huge pot against Mateos three-handed (Mateos picked him off with second-pair jacks) and that left Badziakouski shoving all in with A♦2♦, only to run into Mateos’ A♣10♦.

“That’s OK,” Badziakouski said, and he then watched the dealer seal it for Mateos. Badziakouski left with €611,230.

The heads-up battle pitted the leader from the end of Day 1, Gierse, against the player who had led for almost all of Day 2, and then literally all of Day 3, Mateos. And Mateos had 124 big blinds to Gierse’s four.

Gierse doubled on the first hand of heads up — A♣6♦ v K♦6♥ — but that was a good as it got. On the fourth hand, which was the 92nd of the final table, Gierse shoved with J♣4♠ and Mateos called with K♠3♣. It was a 60/40 situation in favour of Mateos, and the board bricked all the way through.

That gave Gierse a runner-up finish, worth €957,590, and gave the seven-figure score to Mateos, the fourth of his career.

Marius Gierse: A few euro short of a million

Mateos celebrated with his rail, much like he had back in 2015, and will probably now head off to play the Main Event, to see if he can win that one again. You really wouldn’t put it past him.