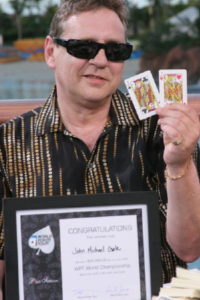 Today we return to 2005, when someone had the bright idea to sign up for some free blogging software and start publishing stuff and what made sense to call the PokerStars Blog…

Jonas came from Denmark on a plane ride that lasted too long to allow sleep when he reached Atlantis. Perhaps it was his fatigue. Perhaps it was pot odds. Whatever it was, it helped him chase his nut heart flush to the river. Whatever it was, it laid the two of hearts at the end of his 20-hour journey and filled in his flush. The man they call Jona2 had the nuts and cracked a pair of kings wide open. It was the first legal hand of live poker ever dealt in the Bahamas. And it was the beginning of an amazing year of PokerStars news.

As 2005 comes to a close and the poker world reflects on another fantastic year, we thought it would be a good idea to take a look back at the past 365 days. We hope you have enjoyed it as much as we have.

2005 PokerStars Caribbean Adventure–For the second year of the PokerStars Caribbean Adventure, PokerStars moved from a cruise ship to one of the biggest five-star resorts in the world. Players came from all over the world to compete the in the WPT event. While there, PokerStars introduced live poker to the Bahamas. It began with a $10/$20 limit hold’em game and blossomed into a week full of big live games. That’s not to mention a huge PokerStars-sponsored World Poker Tour event that ended with English gentleman John Gale winning first place and nearly $900,000.

John Gale with his winning hand

Tsunami relief–Just one month after the devastating tsunami of 2004, PokerStars joined the world in raising money to help the relief effort. In an online campaign combined with a live effort at the PokerStars Caribbean Adventure, PokerStars and its players contributed more than $400,000 to the relief effort, more than any other company in the gaming industry.

PokerStars.com EPT Scandinavian Open–Noah “Exclusive” Boeken was already well-known for his success online at PokerStars. At the European Poker Tour Scandinavian Open in Copenhagen Denmark, the young gun proved he had live poker skills as well. Boeken worked his way through the field and then defeated Ram Vaswani in a heads-up match for the ages.

PokerStars.com EPT French Open–In February, two online poker buddies decided to go to Deauville, France together. Carl Olson had qualified on PokerStars for a seat in the European Poker Tour. His friend Brandon Schaefer was going to tag along and play some side games. Then, at the last possible moment, Schaefer won a seat on PokerStars in a Frequent Player Point qualifier. It became a heads-up match no one predicted. Olson and Schaefer were the final two players left in the event. In the end, FPP-qualifier Brandon Schaefer emerged victorious. And if you find this impressive, keep an eye out for what happens in March.

PokerStars sets weekly tournament record–In what would just be the beginning of a record-breaking year, PokerStars weekly $200+$15 tournament crossed 2500 entries and built a prize pool of more than half a million dollars. The milestone made the weekly Sunday event the biggest-ever weekly poker tournament on the planet.

Happy birthday, Shaq!–When it was time for #32 to turn 33, PokerStars.com was in Miami to throw Shaquille O’Neal a star-studded bash. From Donald Trump to Tara Reid, the stars came out to celebrate with the Heat. While Shaq drew a lot of attention, the live PokerStars charity SNGs drew crowds away from the dance floor and to the felt.

PokerStars Blog launched–In April, PokerStars became the first online poker site to chronicle the daily news events of its community of players. Since then, the blog has covered everything from the weekly Sunday $500,000 guaranteed tournaments, to the EPT, to the World Series of Poker.

PokerStars featured on CBS’ 60 Minutes–In another example of online poker moving into the mainstream, CBS newsman Dan Rather interviewed Team PokerStars’ Chris Moneymaker about the online poker explosion and his key role in the poker revolution.

PokerStars hits two billion hands–Just halfway through the year, PokerStars dealt its two billionth hand. At the time, that would seem like a very big deal. But just wait until November…

“One of a Kind” hit the shelves–With the coming of summer came the best poker story of the year. Nolan Dalla released “One of a Kind,” the true story of poker wunderkind Stu Ungar. Word on the street is that the book could soon be a major Hollywood movie.

PokerStars breaks another weekly tournament record–In July, PokerStars’ weekly $200+$15 Sunday had more than 3000 entries and crossed the $600,000 prize pool mark, crossing yet another milestone for the biggest weekly tournament on the planet.

Isle of Man welcomes PokerStars.com–In August, PokerStars obtained a gaming license on the Isle of Man. The island government subsequently announced PokerStars would soon be moving to the island to establish a new headquarters.

PokerStars World Championship of Online Poker–September was a banner month for PokerStars players. The 15 WCOOP events generated an amazing $12,783,900 in prize money, making the 2005 WCOOP not only the biggest ever online poker event, but the third biggest poker series (live or online) in all of 2005. In the championship event, the final three players chopped the remaining prize money, each earning more than half a million dollars. Panella86 walked away with the championship WCOOP bracelet.

Hurricane Katrina relief–In response to the tragedy on the American Gulf Coast, PokerStars and its players donated more than $100,000 to the relief effort. Team PokerStars Wil Wheaton hosted a series of charity tournaments that helped raise funds and PokerStars matched every donation 100%. Poker professional Barry Greenstein also donated his winnings from a WCOOP event to the campaign.

PokerStars moves HQ to Isle of Man–Just one month after receiving its gaming license, PokerStars opened up it brand new headquarters on the Isle of Man.

Weekly tournament breaks another record–It seemed nothing could stop the Sunday $200+$15. By October, the tournament passed 3500 entries and the $700,000 prize pool mark.

PokerStars VIP Club–In a move that drew praise across the poker community, PokerStars unveiled its new VIP Club. Beginning January 1, 2006, PokerStars players will be getting brand new rewards for their regular play on the site. What’s more, they will now be able to buy everything from electronics to WSOP seats with their Frequent Player Points.

Free money–Finally, over the course of 2005, PokerStars gave away more than $22 million in deposit bonus money and tournament freeroll entries.

There is no denying 2005 was a spectacular year in the PokerStars community. The 2006 horizon looks just as promising.

Happy New Year to everyone.