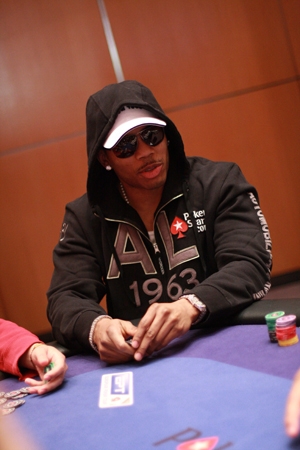 PokerStars is celebrating its 20th Anniversary: 20 years as the best known and most trusted online poker site. Today there is a special $1K buy-in tournament, with a $250K guarantee, whose winner will also receive a round-the-world travel package.

Today we return to 2002, and the launch of what would become online poker’s premier tournament series. Cast your mind back to the first ever World Championship of Online Poker — aka, WCOOP.

When WCOOP launched, Nelly was topping the charts

When 238 players logged on to PokerStars for the World Championship of Online Poker (WCOOP) Main Event in July 2002, George W. Bush was in the White House, Nelly’s “Hot In Here” was at No 1 in the U.S. Billboard charts, and Austin Powers in Goldmember defied lukewarm reviews to gross $73 million on its opening weekend in U.S. theaters.

In the world of poker, there had only ever been one WPT event, the EPT did not yet exist, and Robert Varkonyi was the reigning WSOP champion. He beat a record-breaking field of 631 entries in the biggest poker tournament of the year.

PokerStars and Party Poker were only a year old and you’d be just as likely to have an account with Paradise Poker as you would with either of them.

It was, in short, a very different world. We were pre-Moneymaker, pre-Black Friday, pre-high rollers, pre-just about everything we consider normal about poker these days. A three-bet was still a re-raise; if there was a float you’d try flushing it again; and anyone talking about Twitch would find themselves in Mike Caro’s book on tells, released the following year.

In this era, it was quite a big deal that an online poker company put on a tournament with a $1,050 buy-in, and an even bigger deal that 238 players found the cash to play it. But although the tournament’s winner, Sweden’s “MultiMarine”, became one of the “Ghosts of WCOOP“, the series itself was here to stay.

There were nine tournaments during the first WCOOP, but by 2021 — the series’ 20th running — more than that many tournaments got started every single day. Prize money for the series grew to more than $122 million, and there were close to 1.5 million entries. It started small but WCOOP became a monster. Let’s remember how it happened.

For those nine tournaments during the first edition of WCOOP, buy-ins ranged from $109, for the opening Limit Hold’em event, through $1,050 for the Main Event. All of those buy-ins would have been considered high at the time. WCOOP initially positioned itself as the series for online poker’s elite, and lower-stakes players would have to wait until 2017 — i.e., another 15 years — until a WCOOP tournament arrived costing less than $100 to play.

Back in 2002, the Limit event duly attracted the largest field of 565 the series (limit hold’em was still a thing back then), with the Limit Omaha Hi/Lo recording the smallest, of 135. The average field size through the nine events was 272, which is tiny by today’s standards. But the series went down as an enormous success and proved that the online game could sustain the kind of festival that was proving ever more popular in the live arena — particularly at the WSOP, which was one year away from the arrival of the magnificent Moneymaker.

After our accountant friend from Tennessee lit the blue touch paper in Las Vegas (after qualifying on PokerStars, of course) WCOOP’s popularity swelled in almost perfect symmetry with the WSOP’s.

THE SLOWDOWN AND THE REBUILD

The events of Black Friday, in April 2011, put a stop to the incredible rate of expansion in poker and the WCOOP Main Event suffered a 33 percent drop in numbers from 2010 to 2011. American players had been by far the most dominant in the first nine years of the online competition, winning 136 of the 228 titles on offer during that period. (Remarkably, the United States still stands fourth on the overall WCOOP countries leader board and was only overtaken by the UK, Russia and Brazil over the past two years.) Most Americans hadn’t had a chance to relocate and re-open accounts before WCOOP 2011 started and their absence was always going to have a profound affect on overall numbers.

The WCOOP trophies glinted through the 2021 competition

Despite this setback, WCOOP again survived and numbers pushed up again through the next three years. By 2013, there were more than 2,000 entries again in the WCOOP Main Event and the prize pool was north of $10 million. It has never been less than eight figures ever since, thanks in part to PokerStars putting a $10 million guarantee on the showpiece event.

By now, WCOOP was considerably more than just that one big blowout. Again in common with the WSOP, the series had diversified, broadened and added many more tournaments to cater for players’ insatiable demand. Nine tournaments in 2002 became 18 by 2006. In 2009, there were 45 tournaments. There were 20 more by 2012 and there were 82 events in 2016.

The growth of WCOOP

Then in 2017, organisers experimented with a “low” buy-in version of WCOOP, putting on 82 events with buy-ins starting at $11 as well as 82 events in the “normal” $215+ buy-in range. By this point, there were also two $25K high roller tournaments on the regular WCOOP schedule and there were even a couple of high rollers in the “low” section, with buy-ins of $1,050.

The decision to admit players with smaller bankrolls wasn’t to everyone’s taste, and PokerStars copped a good deal of flak from players who considered the WCOOP brand to be devalued by including lower buy-in tournaments. But the numbers spoke for themselves. In 2016 there were 122,310 total entries across WCOOP’s 82 tournaments. In 2017, there were 662,529 in 164 tournaments. The total prize pools for the series increased from $91.4 million to $99.6 million.

Through this period, WCOOP’s close cousin, the Spring Championship of Online Poker (SCOOP), had proved a great success with three buy-in levels for all events — low, medium and high. It was only to be expected that WCOOP would do something similar, and so it proved from 2018 onwards.

The three price point series is now a fixture in most major PokerStars series, and has been repeated in WCOOP ever since.

Over the years, players from 73 different countries have won WCOOP events, and there are almost certainly at least 20 other countries whose players have competed but haven’t yet claimed the top spot. (Unfortunately, full participation records no longer exist. We only have the winners to go on.)

During those boom years, poker spread far and wide across the globe, and it is never more clear than by examining the distribution of WCOOP tournament winners. In the first year, only four countries could claim champions: the United States, Sweden, Canada and France. Over the next five years, even as the schedule grew to feature many more tournaments, only Norway, the Netherlands, Denmark, Germany, Hungary, Finland, Denmark and Ireland joined them. This was still a game played predominantly in North America, Scandinavia and western Europe.

Without doubt, the rise of Latin American poker — particularly in Brazil — and the emergence of Russia as a poker force has been most dramatic. There wasn’t a Brazilian champion in WCOOP until 2009, and there were only 12 winners from Brazil from 2002-2016 inclusive. However, Brazilians won 21 titles in 2017, 23 in each of the next two years, and 35 in 2020. That was a record, but it was ground into the dust one year later. At the 2021 series, Brazil-based players won a staggering 57 tournaments. That’s now the most ever won by a country in a single WCOOP series.

As for Russia, the eastern Europeans had to wait until 2010 to secure a first champion. (They won four tournaments that year.) But by 2017, Russia and Brazil tied top of the countries leader board, with 21 titles apiece, and Russia now has the most of all, with 193.

Meanwhile Brazil sit tied second in the all time countries leader board, and are closing in on the top spot every single year. New countries continue to emerge too. In 2021, the most recent running, five new countries appeared on the leader board: Andorra, Azerbaijan, New Zealand, San Marino and Uzbekistan.

The 2021 WCOOP was the 20th edition, and by now WCOOP was a solid and safe fixture, with patterns well established. Every event now has three buy-in levels, as has been the case since 2018. The “high” Main Event again had a $5K buy-in and a $10 million guarantee.

WCOOP is also now a fixture on the streaming channels, with live cards-up action being broadcast on multiple nights through the series. WCOOP proved that it can still throw up surprises, such as the moment that two PokerStars streamers won tournaments on the same night — congratulations Spraggy and tonkaaaa — while the veteran Talal “raidalot” Shakerchi became Player of the Series.

WCOOP is going nowhere, of course. As long as there’s PokerStars, there will be WCOOP.