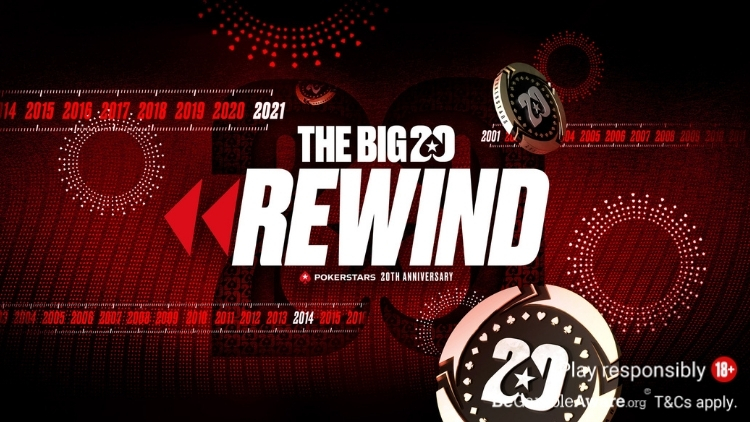 Today we look back at 2003, the year Chris Moneymaker won a World Series of Poker Main Event seat via an inexpensive satellite on PokerStars, then went on to win it all and help ignite a global “poker boom.”

The year 2003 wasn’t just a significant one in PokerStars history, it was a turning point of sorts for poker, generally speaking. In fact, if you took a poll of most people who were alive and of adult age that year, chances are good they’d probably say 2003 was the year they first heard of online poker.

There are a multiple reasons why that is the case, but they all involve one person in particular. An accountant from Tennessee and amateur player, he didn’t necessarily fit the image of poker heroes of the past. But in 2003 he certainly became a modern-day version of one.

And if we were to dream up the name of a poker hero, it’s difficult to imagine something better than his stranger-than-fiction actual name.

On PokerStars, he was “Money800,” just one of many usernames frequently popping up at the virtual tables on the site.

In fact, 2003 was the first year the World Series of Poker began accepting online qualifiers into the WSOP Main Event. Eric Raskin‘s oral history of the 2003 WSOP Main Event, The Moneymaker Effect, provides some context for Moneymaker’s online-to-live path to glory.

Nolan Dalla, then director of public relations for Binion’s Horseshoe and the WSOP, tells how the director of poker operations at Binion’s had developed some relationships with a few online sites. PokerStars was one of three or four such sites that agreed to run some qualifying satellites into the Main Event that year.

That’s how Moneymaker found himself jumping into an 18-player sit-n-go at the last second without necessarily realizing it was a WSOP satellite.

“If I knew I never would have played it,” says Moneymaker.

It was an $86 satellite. Winning that one earned Moneymaker entry into another, larger one with a $650 buy-in for which the top three finishers won seats into the $10,000 buy-in WSOP Main Event plus a $1,000 in spending money. Fourth place got a consolation prize of $8,205, and in fact after reaching the final table Moneymaker thought the cash prize sounded more attractive than the Main Event entry.

A friend convinced Moneymaker to go for the Main Event seat, even offering to give him $5K in exchange for half his action. Moneymaker won the seat, and as it turned out his friend had to tell him he didn’t have the $5K.

Moneymaker did manage eventually to sell some of his action to a friend, a fellow with the last name of Gamble. (No shinola.)

We all know the rest of the story. Beyond fairy tale. Inconceivable. (Thanks, Norman Chad.) Moneymaker topped the 839-player field to win the bracelet, successfully parlaying $86 into $2.5 million.

The introduction of online satellites was novel in 2003. But tournament satellites had been around for a long time before the Year of Moneymaker.

Eric Drache introduced them at the WSOP as tournament director during the early 1980s. In 1983, Tom McEvoy won a seat into the Main Event via such a satellite and went on to become the first champion ever to do so. In fact, the runner-up that year, Rod Peate, was also a satellite qualifier.

Two decades later, online poker made tournament satellites a true game-changer. Allowing players to win WSOP Main Event seats via online tournaments not only helped create larger fields for the event. They changed the makeup of those fields in a couple of significant ways.

For one, more players who primarily (or even exclusively) played online found themselves taking part in the most important live poker tournament of the year. The blurring of the line between “online players” and “live players” had begun in earnest.

Online satellites also increased the number of non-professionals taking part in the WSOP Main Event, of which Moneymaker was one in 2003, thereby altering the “recs-versus-regs” ratio in a big way.

Moneymaker’s triumph that year, viewed by many that fall on ESPN where edited broadcasts of the tournament were repeated during subsequent months, encouraged more and more players to create online accounts on PokerStars and elsewhere.

The following year Greg Raymer turned out to be one of those new “Moneymakers.” He, too, won a Main Event seat online at PokerStars before going on to win the big one for a $5 million first prize. Moneymaker, Raymer, and the following year’s champion Joe Hachem would thereafter help form the core of Team PokerStars as the poker boom kept on boomin’ through the mid-to-late 2000s.

Meanwhile online satellites would become a standard element in tournament poker, helping fuel the rise of tours like PokerStars’ own marquee series, the European Poker Tour that would debut in 2004 (stay tuned!).