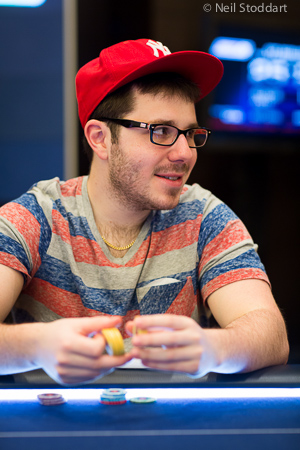 Today we go back to 2008, when Mike McDonald and Jason Mercier both emerged from the online tables to win EPT Main Events. But they weren’t the only future superstars who started out as nobodies on the PokerStars tables…

The American high roller Dan Smith recently described his poker journey in a post he linked to from Twitter. He started playing small stakes online, hit a big score, played more and more through college, and travelled to a few live stops, all the while drifting in and out of staking deals. Eventually he went on an incredible heater, won a bunch of tournaments, and never looked back. Smith is now placed sixth on poker’s all-time money list and is a fixture in the biggest tournaments on the planet.

Smith took the familiar path to the top

Although it happened to be Smith who committed this personal history to paper, the same kind of thing could have been written by at least seven of the world’s top 10 highest-grossing tournament poker players. Bryn Kenney, Justin Bonomo, David Peters, Stephen Chidwick, Jason Koon and Fedor Holz might also have told this familiar tale, with a few slight variations. If we look at the top 20, we can probably add another seven: Steve O’Dwyer, Mikita Badziakouski, Dan Colman, Jake Schindler, Ike Haxton, Tim Adams and Christoph Vogelsang. They grew up in different locations and their paths are obviously unique to them. But all would have described their overall journey in a very similar way.

These players’ abilities cannot be overstated. They are the best of the best, who have turned what for many is little more than a pastime into an incredibly lucrative career. But it’s also worth naming a silent partner in all of this success: PokerStars, the site on which so many major poker careers either started or at least developed into what they are now.

There have always been plenty of other online poker sites, and Smith mentions an Ongame skin as the place he first played. But there simply isn’t a top-ranked poker pro in the world today who has never played on PokerStars. Almost all of them took their game to a new level while playing under the red spade, either online or on a tour such as the EPT.

McDonald came to the final in Dortmund with confidence sky high

Today, the PokerStars Big 20 looks back on 2008, the year when both Mike McDonald and Jason Mercier won EPT Main Events having won their seat through online satellites on PokerStars. And it’s remarkable just how many future poker greats emerged from these tables. In common with numerous others, McDonald and Mercier were unknown to the wider poker world when they rose to the top of the pile in Dortmund and Sanremo, respectively, but both had already been grinding online to set themselves up for their “breakthrough” wins.

In a Reddit AMA in 2013, Mercier said: “I was playing for about two and a half years while going to school and working part time jobs, before I realised I was going to make a living solely from poker. The turning point was when I decided to go for Supernova Elite on PokerStars in 2007.” Similarly, McDonald had been learning poker since he was in his early teens before he contacted the former PCA champion Steve Paul-Ambrose, who happened to share Waterloo, Ontario, as a home town. McDonald asked to watch Paul-Ambrose play online, and subsequently McDonald began applying his skills in the online arena and leapt into live poker with confidence sky high.

Mercier was already thinking about life as a poker pro

“When I played out the final table I wasn’t even looking at payouts, I was just thinking, ‘I’m the best. I’m gonna win this tournament,’” McDonald told Poker Listings, of his win in Dortmund, when he was 18. “That’s how I thought poker tournaments worked.”

Ironically, in the early days of the EPT, some old-school players used to look at the term “PokerStars qualifier” beside an opponent’s name and think it represented a soft touch. But although these internet-educated players might not have known as many chip-riffling tricks as the live pros, they quickly demonstrated far more chip-accumulation tricks.

Bonomo never looked back after Deauville

In Deauville during the EPT’s first season, the player at the final table named Justin Bonomo was already well known online as “ZeeJustin”. Bonomo himself was still learning the ropes as a live player, with only one previous documented cash, but he realised that he had an edge against his opponents in France.

He told me about it several years later. “When I was 19, I made my first big final table. I was actually the first teenager ever to make a final table at that point,” Bonomo said. “Going into the final table, I was incredibly nervous and I just asked one of the other players if he was nervous, and of course he said yes. And from his answer it was just so obvious to me that he was far more nervous than I was. And for whatever reason, that just made me so calm and so confident. And ever since that moment, I’ve never looked back.”

Chidwick was a qualification machine online

Few players attracted as much attention on PokerStars in 2008 as a UK-based crusher known as “stevie444”. At a time when PokerStars still hosted qualification satellites to the World Series of Poker (WSOP) Main Event (and had provided the winners from 2003 and 2004), stevie444 was seemingly in them all. But he wasn’t just making up the numbers: stevie444 won more than 100 packages to the WSOP that year — that’s more than 100 $10K buy-ins, plus expenses, ie., equity of more than $1 million.

The crucial detail was that Stephen Chidwick, who was the real person behind the stevie444 moniker, was only 19 at the time and couldn’t legally sit down to play in Las Vegas. He was simply racking up the PokerStars T-dollars, refining his game at the online tournament tables, and occasionally dipping his toes into the live poker scene. He wrote something for PokerStars Blog at the time. “The whole experience is definitely one I would recommend,” he said.

Chidwick’s first documented live tournament cash came at the PCA of 2008. He then picked up further scores at EPT Barcelona that year, and on the Latin America Poker Tour soon after. His incredible career has never lost momentum for even a second ever since.

Chidwick’s name is now regularly mentioned in discussions of the world’s best tournament players, and his total career earnings of more than $37 million put him at first place on the UK all-time money list, seventh in the world. It all started on PokerStars.

There are even more examples, of course. A wonderful post appeared on the Two Plus Two poker forum in October 2013, posted by a user named “CrownUpGuy”. “I got really lucky in life lastly (sic) and I want to give something back,” the user wrote. “I will grind NL500 Zoom the next 20 days straight and I will to donate 50% of my winnings to charity. In addition to that, I will match all of your donations offered in this thread…This is an opportunity for you to help make the world a better place, twice as fast as you could by donating elsewhere!”

CrownUpGuy revealed himself as a 20-year-old German named Fedor, who had been playing poker for two years. He described how he “grinded a lot online” in the preceding months, and we later learned, of course, that his last name was Holz. He was making the philanthropic gesture because he had suddenly found money rather easy to come by, having hit a rich run of form at the poker tables. Alongside a graph showing a profit curve jagging skyward, Holz also provided a year-long travelogue, complete with photos, in which he described an awe-inspiring tour of the world — a kind of gap-year-plus — playing and winning at poker, and investing the money in life-changing experiences.

Most of the live successes were at PokerStars events. The graph showed PokerStars profits.

At the ripe old age of 20, Holz wrote: “When I look back at my life I feel an inner happiness I didn’t feel before. It took me some time to realize how much these experiences are worth and now I know that I don’t want to waste my life ever again.”

The most amazing thing about Holz’s post is that he hadn’t yet even started the streak of tournament wins that sent him flying to the top of the money lists. That surge began in earnest about a year later, when he won the WCOOP Main Event. He then spent most of 2015 and 2016 picking up six and seven-figure tournament scores, cementing his place as one of the all-time best.

He was another extraordinary graduate from the online world.

TABLES OPEN TO PLAYERS OF ALL AGES

PokerStars was also responsible for introducing the game to hundreds of thousands of players who originally regarded it as nothing more than a hobby. But some managed to pull off exceptional things, against all odds.

Another player who would go on to much greater success picked up his first major score at the same PCA in 2008 as Chidwick, although he was far from an 18-year-old whipper-snapper. Pierre Neuville discovered poker in the 1950s, but it took a back seat as the Belgian enjoyed a long, successful career as an executive with the board game manufacturer Hasbro. (He designed a game with the legendary cyclist Eddy Merckx, among other things.) But as he entered his retirement years, Neuville returned to poker, which he now discovered he could play online, from the comfort of his own home.

Neuville qualified repeatedly for PokerStars live events, finishing runner-up in EPT Main Events in both 2009 and 2012. He insisted in 2015, when he was 72, that the best was still to come and, three years later, made the WSOP Main Event final table, finishing seventh.

Neuville was on the Team PokerStars Pro roster for a few years, but was so proud of his roots in the online game that he used to embroider his own shirts with another nickname he had picked up along the way, the “Serial PokerStars Qualifier”.

Perhaps Neuville never scaled the heights of Bonomo, Chidwick or Holz, but it’s not often someone finds a new career well into their 60s and then manages to turn it into such a noteworthy success. But online poker has always been open to everyone, and Neuville accepted the invitation with glee.

The good news is that the tables are still always open. And poker will always need its superstars. No doubt there are more to be discovered very soon.