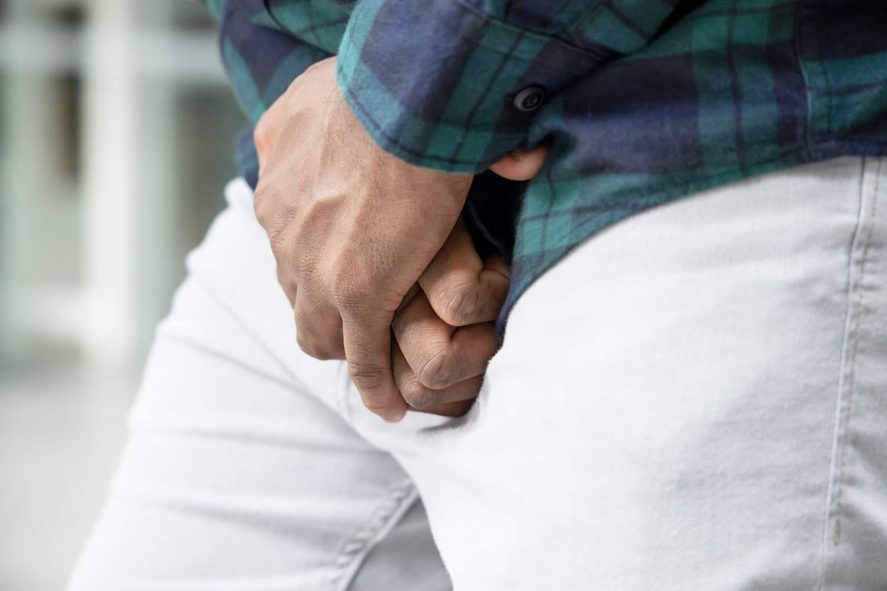 As previously mentioned, prostate cancer is the most common cancer in men (with around 48,500 new prostate cancer cases in the UK every year), and though the causes are largely unknown – what we do know is that most cases are seen in men over the age of 50.

The risk might also be higher in obese men, men who have a brother or father who has had the disease, or in black men (1 in 4 chance, compared with the 1 in 8 chance that other men have).

Prostate cancer develops slowly over a number of years, and there may be no symptoms at first. Symptoms often won’t appear until the cancer has grown to a size where it is putting pressure on the urethra and causing issues with urination.

Signs and symptoms of prostate cancer to look out for, include:

Needing to urinate more oftenHaving to rush to the toilet very suddenlyWaking often to urinate during the nightNot emptying your bladder fullyHaving a weak flow of urine (even when the urge to urinate is strong)Straining to urinate, or taking longer than usualFinding it hard to start urinating, even when you feel desperateBlood in urine or semen

Having these symptoms doesn’t necessarily mean that you have prostate cancer, but it’s crucial to make an appointment with your GP who can run some tests, and help you get to the bottom of what’s going on.

The first step will usually be to have a PSA test. This is a blood test, which will measure the amount of protein-specific antigen (PSA) in your blood. This protein is made in the prostate and can make certain indications about its health.

High levels of PSA can indicate that there’s a problem (though not always cancer). Your doctor might also do a urine sample, ask you to keep a bladder diary, and/or do a physical examination of your stomach area, penis, and prostate (which can be felt through the wall of your rectum).

The reason that PSA tests are not given routinely to all men is that although they can help to detect cancer in some cases, they can also miss cancer or produce a false-positive result. This can lead to false reassurance if there’s cancer, or extra tests (and worry) if there’s no cancer.

PSA tests also can’t distinguish between slow and fast-growing cancers. Some slow-growing cancers can be actively monitored for years and never cause any problems – so not being able to provide more early detailed information for patients about their prognosis can cause unnecessary worry.

However, whether you have symptoms or not, it’s important to note that you’re still entitled to a PSA test in the UK if you’re over the age of 50, and are aware of the pros and cons of testing.

If you have a PSA test and your levels are raised, or your doctor is concerned about the results of any other tests or about your symptoms – then they may send you an MRI scan of your prostate to confirm whether there’s a problem. If the scan shows anything abnormal, then a biopsy will be able to determine more about what the problem is, and whether cancerous cells are present.

To find out more about how prostate cancer is diagnosed, and what tests are used, it’s worth having a look at this information from Prostate Cancer UK.

The prognosis for men with prostate cancer is usually good (and may not shorten a man’s life) if it hasn’t spread beyond the prostate. Treatment will usually depend on factors such as age and prognosis, but can include options such as active surveillance, prostate removal, radiotherapy, chemotherapy, and hormone therapy.