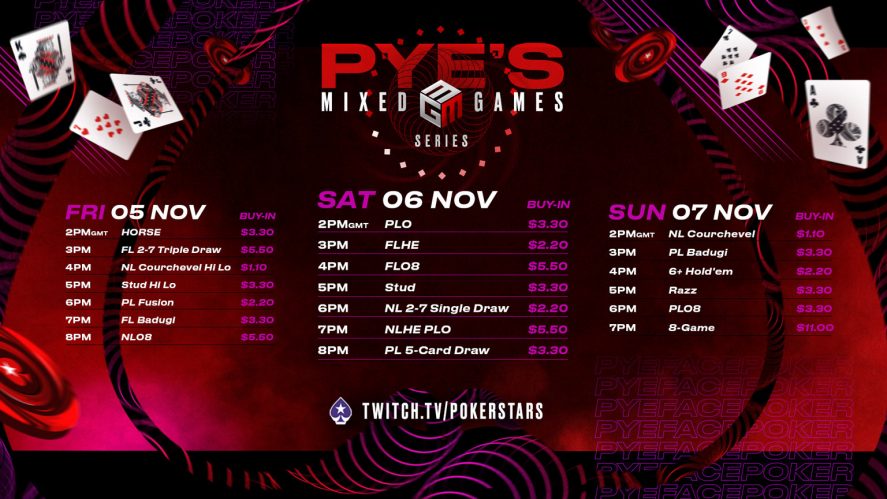 They say variety is the spice of life. For Mason “pyefacepoker” Pye, it’s a way of life.

He pushed for a Mixed Game Series way back in 2018. Now it’s happening.

The PokerStars Team Pro has organised Pye’s Mixed Game Series–the first of its kind on PokerStars–and it all starts this Friday, running from 5th – 7th November.

Pye’s Mixed Game Series will showcase a variety of the poker variants which have made Pye’s Twitch stream so popular over the past three years. No Limit Hold’em tournaments are out (bar one, which is a NLHE/PLO mix) but there are 20 tournaments in total, each featuring a different game.

Here’s a look at the full schedule:

If you’ve never played the likes of NL 2-7 Single Draw or Limit Razz before, don’t worry. The buy-ins for the series range between $1.10 and $11, allowing everyone to take part to play and learn some new poker games together.

It all culminates in an $11 8-Game Main Event (Sunday, 7 November) with $20K guaranteed, for which satellites are running right now.

Pye and his fellow Team Pro streamer Georgina “GJReggie” James will be hosting coverage of the Mixed Game Series on the PokerStars Twitch channel, giving away entries to the events with multiple ticket drops.

In fact, if you watch any PokerStars Ambassador Twitch stream this week, you could land yourself a ticket. Chest drops are happening right now, giving random viewers the chance to get involved for free.

Pye–who won a Spring Championship of Online Poker title (SCOOP) earlier this year in a Stud event–encourages everyone to come and try the games that you may have always wondered about but were too nervous to try.

“The Mixed Games Series is the perfect opportunity for players to dabble into variants other than No Limit Hold’em,” says Pye. “Not only are Mixed Games fun, but they also help you become a better overall poker player. With tournaments aimed at those with modest bankrolls, there has never been a better time to get involved and join the Mixed Games Movement.”

Pye will also be running play money and $0.11 home games on his own channel this week, for those that want to practice before the weekend.

Here’s how you can join the Mixed Games Movement Home Game: