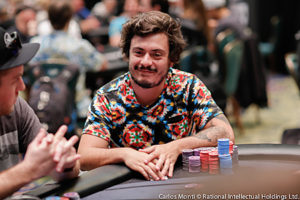 Here’s where you’ll find the latest highlights and PokerStars results, including the Sunday Majors and High Roller Club. Highlights this week include:

50/50 Series pays out $2M in first day: The 50/50 Series kicked off on Sunday with seven events on the schedule. Most guarantees were surpassed, meaning the series paid out over $2 million from Sunday’s events. Among the big winners were “AjPokerPro” of the UK, who took down the Series Opener for $31,125. “selinantis” of Lithuania won the 05: Sunday Supreme for $32,789. selinantis has final tabled WCOOP and SCOOP events in recent years, so it was great to see the player claim a title and first place. “MrNorberto” of Hungary added to $1.4 million in online cashes, winning the 06: Sunday Chaser for $19,001 (inc. bounties).

Ramiro Petrone defeats elite final table: He’s won WCOOP, SCOOP, Blowout Series and Stadium Series titles and has online winnings of over $11.8 million. Ramiro “ramastar88” Petrone is certainly a player who can hold his own against the game’s very best. Good job too. The final table of the $1,050 Sunday Warm-Up was crammed with elite pros like “Malaka$tyle”, “probirs” and “WhatIfGod”. Heads-up brought no relief. Petrone had to take on Simon “C. Darwin2” Mattsson before finally claiming the top prize of $19,356.

Simon “IgorKarkarof” Pederssen wins Sunday HR: The $1,050 Sunday HR was already one of the High Roller Club’s top weekly tourneys when it comes to prize pools and the show just got even bigger – the guarantee for this tourney has just been boosted to $200k. Simon “IgorKarkarof” Pedersen of Denmark made the most of it, beating Lithuania’s “A.Wesker999” heads-up to bag a rather delectable $43,714 for first.

Top ranked player does it again: “WizardOffAz”currently sits fifth place in the PocketFives rankings and was only recently ranked second in the world. You can’t exactly blame Yuri “theNERDguy” Martins for agreeing to chop the prize pool heads-up in the $1,050 Sunday Supersonic. With two pros facing off and a furiously fast structure to contend with, the two Brazilians agreed to split right down the middle and take $17,809 each. WizardOffAz did come first, protecting his ranking in the process.

Ship It 2020 forces Mattsson to settle for second: Mattsson already had to settle for second place in the aforementioned Sunday Warm-up. The Swedish pro reached the same position on Day 2 of the $530 Bounty Builder HR, falling short again but still picking up $44,492. Mattsson was this time denied by “Ship It 2020” of the UK, a player who does well for themselves too with over $4.4 million in online winnings. Ship It 2020 earned $69,827.

$5k Titans event pays $140k to winner: The $5k Titans event has been added to the High Roller Club schedule. This weekend, the tourney had a prize pool of $655k from 131 entries. Team Pro [Papo]AR made the final table, placing sixth for $40,085. Heads-up, Juan “Malaka$tyle” Pardo and Sergi “srxakgirona” Reixach made a deal to even out the immense top prizes. Pardo finished second for $114,267 and Reixach came first for $140,533.

Players were treated to an overlay of around $70k in the half price Sunday Million, adding extra value to the event, which had 18,589 entries.

With 15 players remaining, “zum-zum077” of Russia emerged as favorite with a solid chip lead over even second place, before loosing a big pot to “andmatos97” – a Brazilian player who qualified for just $5.50 and eventually finished third for $44,253.

As the final table commenced, “zeeh_pb”, one of five remaining Brazilian players, had taken the lead and started off the action with a crafty 4-bet bluff. In the end the player, who won a BSOP Online event last year, came heads-up against “Fr0mNL” of Malta. Fr0mNL came out on top, earning $81,560 for the win.

Below you’ll find the list of winners from this weekend’s biggest High Roller Club tourneys:

Here you’ll see a list of winners for the most prestigious weekly Sunday majors: