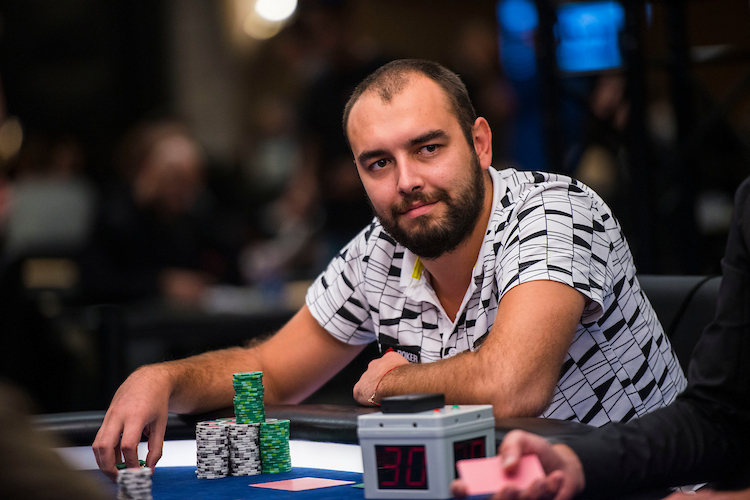 Twenty-one new champions were crowned on Saturday’s Day 11 of the 2022 Spring Championship of Online Poker (SCOOP), including some very familiar screennames. Find out all the latest in today’s bulletin:

Dimov denies Lex in $10K Thrill
Schemion and Aziz make it two in 2022
Titles for Parssinen, Mattsson and Yurasov

Dimov captures first SCOOP title: We’ve got to admit, we were a bit shocked to discover that Bulgaria’s most successful online poker player, Ognyan “cocojamb0” Dimov, had never won a SCOOP title before Saturday night. With $6.7 million in online winnings and huge WCOOP and Winter Series wins in the past, it just seemed a lock he’d already had success in the Spring. Well, he set the record straight last night in furious fashion, taking down one of the biggest events of the series: the $10K Thursday Thrill PKO (SCOOP 54-H) for $245,889, including a staggering $150,313 in bounties. To do so, he had to deny PokerStars Team Pro Lex Veldhuis his maiden SCOOP victory. The Twitch superstar was streaming the final table–which also included Jans “Graftekkel” Arends, Christian “WATnlos” Rudolph, Lucio “WizardOffAz” Lima, Dmitry “yurasov1990” Yurasov, Pablo “pabritz” Brito, and “Nacho124441”–to thousands of viewers, but ultimately fell in third place for $80,646. It was Nacho124441 who finished runner up from the 69-entry field, good for $123,388.

Schemion and Aziz become double champions: Two more players won their second SCOOP titles of the year last night. The first was Ole “wizowizo” Schemion who is having a fantastic series so far, winning the $10K Super Tuesday for $202,432 earlier in the series before adding the $320 Weekend Starter (SCOOP 57-H) to his CV last night. He banked $27,691 for the victory, and that makes it six titles overall for Germany’s Schemion, who plays from Austria. PokerStars Team Pro Tom “MajinBoob” Hayward had a deep run in this one, finishing fourth out of the 358 entries for $11,232.

Big wins for big names: Let’s be honest, it was only a matter of time before Swedish superstar Simon “C. Darwin2” Mattsson secured another title, having won two last year. Mattsson picked up his third trophy last night with a victory in the $1K 4-Max PKO (SCOOP 62-H) for $41,362, including bounties. That event saw 161 total entries.

Elsewhere, Finland’s own superstar Eelis “EEE27” Parssinen won the first SCOOP title of his illustrious career by taking down the $5K PLO High Roller (SCOOP 59-H) for $110,663, defeating Sweden’s “ShipitFTW911” heads up. That event had 82 total entries, creating a $410K prize pool. In the $530 medium edition, it was Dmitry “yurasov1990” Yurasov who came out on top for $29,274, also capturing his first SCOOP title. It was a very successful Saturday for the Belarussian, who was also on the $10K Thrill final table.

Third title for WTFOMFGGOAO, second for alberto.m7: A big shoutout to “WTFOMFGGOAO” who has now won a SCOOP title every year for three straight years. The Russian player-who now plays from Montenegro–took down the $55 PLO8 (SCOOP 55-M) for $8,522, adding to the 5-card NLO8 (2020) and NLHE PKO (2021) titles they already owned. We’ve also got to shout out the first title of the year for the Dominican Republic. It was “alberto.m7” who got the job done in the $1K Turbo (SCOOP 63-H), winning $39,478 and their second career SCOOP title. The first came in 2018 with a $530 Win The Button victory.

By the time today’s play comes to an end we’ll have topped $50 million in prizes!

(Note: Stats from completed tournaments only)

4th, was a solid run, unlucky at the end. Still feel lucky though. Thanks for the rail 🍻 pic.twitter.com/qdHV8vu7gF

And GG to Lex Veldhuis, who put on an incredible show on the $10K FT.

Just a modest four titles for Brazil yesterday, who now have 30 titles more than their nearest competitor, the UK. Meanwhile, we saw two new countries enjoy success yesterday: Slovenia and the Dominican Republic.

Patrick “pads1161” Leonard still has a stranglehold on the overall leaderboard, but a two-title surge from Ole “wizowizo” Schemion sees the German enter the top 5 and top the high board. Today’s Sunday session could prove pivotal.

Here are the latest top fives. Full standings are available on the main Player of the Series page.

There’s another monstrous Sunday session in store for you all today. Polish those monitor screens then fill them up with the following: