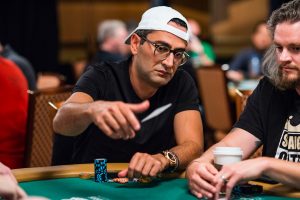 The live poker scene, particularly during the peak years of the 2000s, offers prize pools unrivaled by online events. Online poker, meanwhile, has brought together the biggest fields in the history of the game.

There are a few different ways to define the biggest poker tournaments in history – by prize pool, first place payout, and field size. In this article, we take a look at the standout events from each category.

The WSOP has long reigned as the biggest poker circuit in the world. And when it comes to tournament prize pools, the WSOP Main Event holds 14 of the top 15 spots.

Below are the five biggest poker tournaments in history by prize pool, all of them WSOP Main Events:

In 2006, 8,773 players entered the $10k Main Event to make for a prize pool of $82,512,162. By the time the tourney finished, the top 12 players were millionaires. Jamie Gold of the USA came first for $12 million, which also set the record for the biggest first place payout at the time.

But since then there have been bigger…

Hosted at the WSOP, the Big One for One Drop is an invitational poker tournament with a buy-in of one million dollars. As you can image, this makes for incredible prize pools and ridiculous first place payouts.

Antonio Esfandiari won $18.5 million at the Big One For One Drop

In 2012, the Big One for One filled all 48 seats for a total prize pool of $42.67 million (the other $5+ million was donated to the One Drop Foundation). Antonio Esfandiari beat Sam Trickett heads-up to claim the top prize – $18.35 million.

Esfandiari’s $18.5 million win is still one of the biggest payouts in poker history, but in an unusual situation involving a multi-million dollar deal one player has now beaten this total, at least unofficially.

In the 2019 Triton Millions, also a charity event with a one million dollar buy-in, Bryn Kenney of the USA and Aaron Zang of China found themselves playing heads-up for insane amounts of money. The pair decided, rather sensibly, to opt for a chop.

Zang went on to win the tournament, earning $16.7 million for first. Kenney had a significant chip lead at the time of the deal and so, despite coming second, walked away with $20,563,224.

When it come to field size, the biggest poker tournaments can be found online, where players from around the world can take part.

PokerStars have set and broken the record for biggest poker tournament by field size on five occasions, starting in 2008 with 35,000 entrants, and peaking June 2013 when 225,000 players all registered and played in the same $1 tourney.

Despite the popularity of online poker, the live circuit – particularly the well established series like WSOP and EPT – has always offered bigger prize pools and payouts. But occasionally online tourneys do reach similar heights.

PartyPoker held record breaking online tournaments for two consecutive years in 2018 and 2019, the first with a $5k buy-in and the second with a $10k buy-in. Both of these events reached prize pools of $20 million.