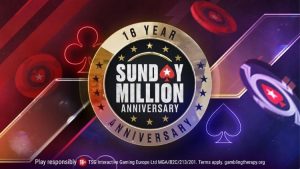 Are you one of those poker players who has always wanted to play the Sunday Million, but hasn’t?

Someone who intends one day to step up in their game, but has no real plan for how to go about it?

If you are, this Ultimate Guide is for you.

It’s for anyone who wants to play the Sunday Million for the first time, but for whatever reason has yet to take that step.

Whether it’s because you don’t think you have the experience… or the timing just isn’t quite right… or because your bankroll doesn’t stretch that far.

Those things sound pretty persuasive when they echo in our heads.

But while you might not think it right this second, the timing actually IS right. Your experience IS enough.

We’re about to show you why you don’t really need much of that.

And the timing couldn’t be better.

For a start you’d be playing the Sunday Million, not reading about it on Monday morning.

That would make you one of those players who operates from the middle of the poker world — not just in its orbit.

And yes, you might be a little more tired on a Monday morning. But feeling a little less energetic never felt so satisfying.

And let’s be clear for a second. We know it’s not simple. There’s effort involved.

But that’s what we can help with.

This guide makes that process as easy as possible.

It’s usually the biggest event of the week on PokerStars, with a $1 million guarantee. That’s life-changing money to the top finishers, and life-enhancing money for many others.

This weekend though there’s $10 million in the prize pool. That’s something else. With two $1 million payouts expected at the final table.

That makes it the event everyone wants to play.

And yet so many still don’t, held back for reasons that we will dismantle one by one in this guide.

Maybe it’s confidence, experience, or just feeling out of place. We’ll show you how each of those can be easily overcome.

We’ll show you why not only are those fears misplaced, but how you can by-pass all of them, take a seat, and play your best on the biggest weekly poker stage there is.

Even if your bankroll rattles rather than flutters.

Even if your playing time is based around family and work.

Even if your ambition says yes, but your confidence says no.

It’s time to become the player you always wanted to be. Read on to get started.

Register for the Sunday Million this Sunday

Your first Sunday Million is a challenge worth taking on

The Sunday Million can seem like a big obstacle. No other event is talked about and written about every week.

Then there’s the money involved.

The more zeros in a prize pool the more experience you need, right?

But then think about it – how many obstacles worth scaling do you know that have ever been described as “small”?

The space programme didn’t aim to put a man on top of the world’s tallest building.

Hillary and Tenzing did not set out from base camp to get as far as they could up Everest before it got a bit too chilly and they turned back.

Your aim is simply to play the Sunday Million for the first time.

Luckily it’s not as hard as reaching the moon, or the top of Everest. Even though it might feel like that sometimes.

How to get past old obstacles

So it’s easy to put off. Maybe next week, or next month, or next year.

And that’s fine if you’re not fully committed to that next step. Test yourself next time perhaps. Let this opportunity slip by.

Of course, you’re not thinking that.

You want a way in, and the obstacles between you and a seat are real.

That’s why we’re going to help you get past them.

Because something happens when you play the Sunday Million. You’re taken out of rookie status, and into a new way of thinking.

Call it poker’s rite of passage.

You’re sent off into an unfamiliar environment, but return better, more knowledgeable, less afraid, and ready to try again.

How to dismantle the things that used to stop you

What you’ll find here is the complete and Ultimate myth busting Guide to playing the Sunday Million this weekend – and every Sunday Million beyond that.

The guide is made up of FIVE easy-to-follow Chapters.

Each teaches you how to survive a particular scenario – one that’s likely to have put you off playing in the past.

You can pick and choose which chapters to read if you prefer. Or you can read them in order one by one.

Here’s what you’ll learn along the way.

In CHAPTER #1 you’ll learn how to avoid busting before you even take a seat. In other words, how to successful win a seat to the Sunday Million in a satellite for a dollar or two.

In CHAPTER #2 we get to the nitty-gritty of how to play against those aggressive players who you dread, and who so often ruin your tournament. It will arm you with everything you need to spot them, adjust and even turn the tables on them.

In CHAPTER #3 we take luck out of the equation. We outline what strategies you can use when you’re card dead and in need of a hand.

CHAPTER #4 talks money. How to reach it rather than crashing out before the bubble.

And in the final CHAPTER #5 we arm you with the knowledge you need to take on more experienced players, as you go deeper into the business end of the tournament.

By the end you’ll not only see how those mountains you put in your way were actually molehills, but you’ll be eager to put what you’ve learned into practice.

Start being the player you want to be

It’s natural to size up a poker game in terms of how likely you are to do well.

It’s also true that the Sunday Million Anniversary contains arguably the toughest field of players. In some ways, you’re right to think that’s an obstacle!

The lessons you’ll learn here are designed to help you see past the obstacles you previously believed to be too high to overcome.

And, to play the tournaments you’ve always wanted to play, but were too afraid to try.

This guide will demonstrate that there’s nothing stopping you.

Perhaps you don’t think the time is right to play the Sunday million for the first time. That’s understandable. It takes courage to do things like this – even to take a step closer to the player you want to become.

But becoming the player you want to be – -the version of you that is most capable when dealt two cards in a game of hold’em – takes action.

And you can take that first action in Chapter #1…