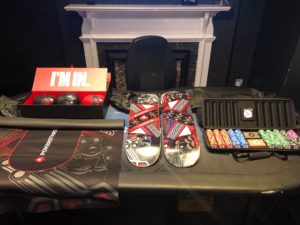 Brian Davis, better known to the world as True Geordie, formed a partnership with PokerStars almost one year ago. Since then, the famous Youtuber, who has close to two million subscribers, has been on an epic journey, from learning to play poker online to hosting his own poker game, The Showdown.

Taking the next steps into the poker world, True Geordie recently held his very own PokerStars event at the Hippodrome in London, where his loyal Twitch community could finally get involved with the action.

“We’ve been doing The Showdown for weeks now and some of the other lads have said how much fun it is to play live with other people,” said True Geordie. “As well as that we have tons of fans we’ve not had the chance to interact with in years due to Covid and thought this would be a great way to celebrate our poker journey with them.”

Fans competed in a series of freerolls to win an invitation for themselves and a friend to a shootout poker tournament, held on October 27. at the Hippodrome, London. The event proved to be a huge success, with an electricity that True Geordie described as a “poker game with a boxing atmosphere”.

The night began with a reception at the Casino’s trendy Upper God’s Terrace area. Then it was down to the PokerStars card room, where entrants took seats at their first table of the shootout.

Additional bounty prizes were up for grabs on each table for knocking out well known names like Laurence McKenna, Rory Jennings, Adam McKola and Laurence Bury, as well as PokerStars Team Pro players Mason Pye, GJ Reggie and Spraggy. James Hartigan was there to provide announcements and commentary.

Each final table winner went on to play against True Geordie himself for a cool £4,000 in prizes, plus an additional £500 bounty for knocking out the Youtube celeb.

The eventual winner of the final table was Jack Brian, who happens a part of True Geordie’s editing team. Brian took £2,500 and a coveted PokerStars spade trophy for his victory.

“It was an amazing night, one of the best nights I’ve ever had,” said True Geordie, “and to top it all off our runner Jack won the thing as well. He was supposed to be dogsitting for me until a few hours before!”

The party continued with music, drinks at Lola’s, and photo ops with True Geordie. It’s amazing to see how poker brings communities together. And the journey doesn’t end there.

“Hopefully we will have a lot more poker content to come, from more of The Showdown to potentially a trip to Vegas. It’s going to be amazing! We’re just getting started with poker content,” says True Geordie.

For more exciting poker content and potentially more opportunities for events like this in the future, make sure to follow True Geordie on Twitch. Also, keep an eye out for a video documenting the event to be posted soon on TG’s Twitter.