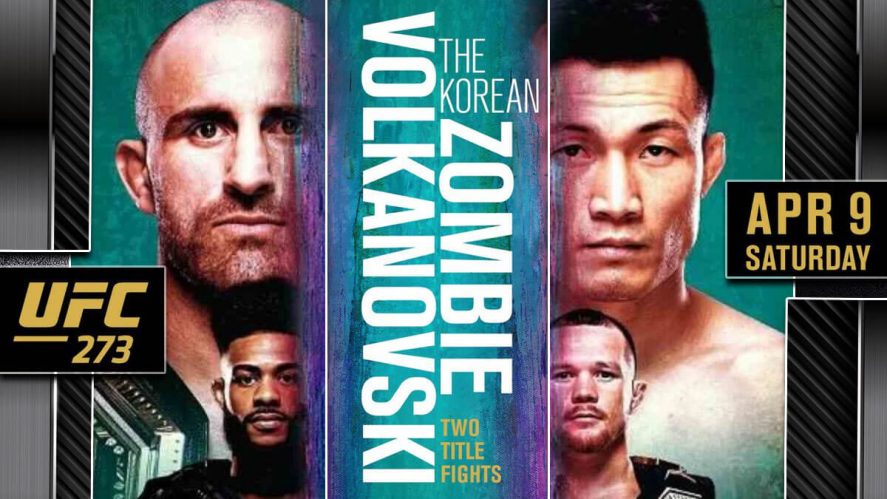 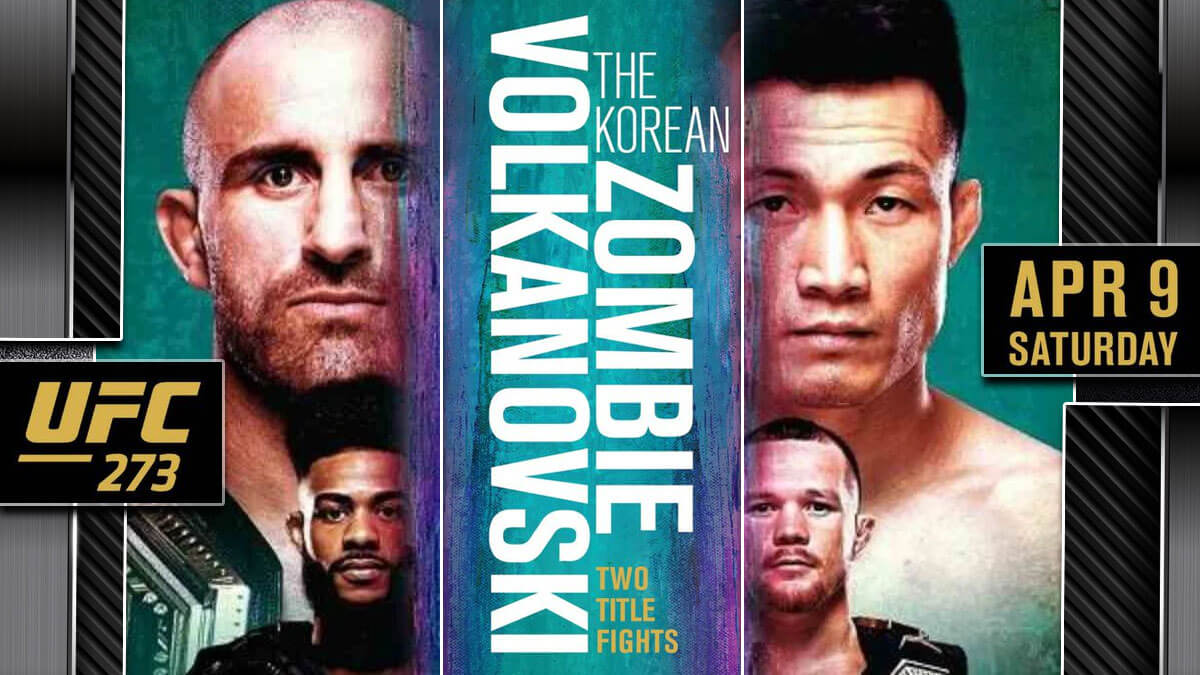 Another massive UFC Pay-Per-View card is just around the corner. UFC 273 is stacked from top to bottom with fun fights, including two massive title bouts in the main and co-main events. Today, I’ll be providing an in-depth UFC 273 betting preview with an analysis of the odds and matchups.

This is shaping up to be a very exciting night for MMA fans around the world. Nearly every fight on this card has big implications for their respective divisions.

Here’s what you need to know about this upcoming fight card!

Every fight card faces shake-ups. UFC 273 is no different. A number of new fights were moved to this event when initially planned for other cards. Several bouts scheduled for this event have been canceled, too. Below is a look at some of the changes made to this card in recent weeks.

Gastelum vs. Imavov is Scrapped

Shortly after UFC 273 was announced, an important middleweight matchup between Kelvin Gastelum and Nassroudine Imavov was booked on the main card. Unfortunately, this fight was scrapped due to injuries. Several replacement bouts were booked, yet fell through, as well.

Irene Aldana Drops Off the Event

Irene Aldana is a very talented fighter coming off an impressive TKO win in her last bout. Unfortunately, she was forced to drop out of her UFC 273 fight against Yana Kunitskaya. Former title challenger Raquel Pennington has agreed to step into Aldana’s place.

A heavyweight bout between Alexey Oleinik and Ilir Latifi was expected to take place on this card. Latifi was eventually forced off the card for undisclosed reasons. Jared Vanderaa has agreed to step into Latifi’s place against Oleinik.

The rest of this card has managed to stay together. Fans now have some fantastic last-minute betting opportunities for this entire card. Below is a look at the odds for this event, courtesy of BetOnline.

Alexander Volkanovski has been ruling over the UFC’s featherweight division since 2019. He is one of the best pound-for-pound fighters in the sport and has gone 10-0 during his run through the UFC. Volkanovski is a powerhouse and continues telling the media he plans to score his first knockout since becoming champion in this bout.

Chan Sung Jung agreed to step into this title fight after Max Holloway was forced off this card due to injury. He is certainly a worthy challenger. “The Korean Zombie” has won three of his past four bouts and is one of the best finishers at 145 pounds. Nearly all online sports betting sites list Sung Jung as the +500 underdog leading into fight night.

This is the most important part of this UFC 273 betting preview. Volkanovski is looking to prove he is amongst the best fighters in the sport. I feel he proves that by winning a clear, unanimous decision using his leg kicks and wrestling skills.

Alex needs to be careful not to get caught with the uppercuts of Chan Sung Jung. If he can maintain range with kicks and takedowns, this is a fight he will win. I agree with the over/under odds here and predict this bout will end in a decision.

Check out my in-depth betting preview for this fight here.

Aljamain Sterling won the UFC bantamweight title via disqualification to Petr Yan last year. He is now looking to prove he is a true champion in this rematch with Yan on Saturday. Sterling is coming into this rematch as the +370 underdog and needs a win here to change how fans around the world view him.

Petr Yan is one of the scariest fighters in the UFC. He is good everywhere, yet his own mistakes inside the cage have cost him throughout his career. Yan’s manager claims he is healthy for the first time in his career leading into this bout and enters as the -470 favorite.

Petr Yan was winning the vast majority of the first fight with Sterling last year before hitting him with an illegal knee. I believe he will continue that momentum this Saturday. Yan is the far better striker and has the grappling skills to keep this fight on the feet.

The majority of UFC 273 picks seem to be taking Yan in this bout. I feel that his striking skills will play the biggest factor on fight night. Petr Yan will survive Aljamain’s early onslaught of wrestling before catching him in the 3rd or 4th round with a knockout shot.

Perhaps the most-talked-about fight leading into UFC 273 is the one between Gilbert Burns and Khamzat Chimaev. Burns is a former title challenger with some of the best jiu-jitsu in all of MMA. He is very skilled and experienced, yet comes into this bout as the +400 underdog.

Khamzat Chimaev is one of the brightest prospects in all of MMA. He has shown elite wrestling and striking during his run in the sport. Just about every single online MMA betting site lists him as the -600 favorite.

Many questions surround Khamzat Chimaev leading into this fight. Fans are eager to see just how good he really is. I happen to believe the hype and feel this is a fight he will win before it goes to the judge’s scorecards.

Chimaev is the better striker and has the wrestling to keep this fight standing. I expect him to remain on the feet, utilizing powerful kicks and punches to hurt Burns. In the second, he will connect with an uppercut that puts Burns out cold.

Mackenzie Dern is finally stepping back into the Octagon after a tough defeat to Marina Rodriguez in her last fight. She remains one of the best jiu-jitsu athletes in the strawweight division. Despite coming off a loss, Dern is coming into this bout as the -117 favorite.

Tecia Torres is entering this bout off the most impressive win of her career against Angela Hill. She is a powerful striker with a much-improved ground game. Torres has not lost since 2019, yet enters this fight as the -103 underdog.

This is one of the hardest additions to this UFC 273 betting preview. Both of these fighters have vastly different skill sets and the winner will be who is able to utilize their skills better. I believe that Torres is the one who accomplishes that goal.

Historically speaking, Tecia fares well against grapplers. I believe she will be able to keep this fight standing against Dern. As the fight goes longer, Torres’ striking will drain Dern’s gas tank and she will be awarded the win via unanimous decision.

Vinc Pichel has been competing in the UFC since 2012. He flies under the radar, yet is finally getting major attention after going 3-0 in his past three bouts. Pichel is well-rounded and does his best to drag opponents into deep water. Pichel is listed as the -120 favorite in this bout.

Mark Madsen is a former Olympic silver medalist and one of the toughest wrestlers in the lightweight division. Madsen sticks to his strengths, choosing to take his opponents down and landing hard shots from the top. As of now, Madsen is listed as the +100 underdog.

I am somewhat surprised to see Madsen listed as the underdog in this bout. He has the better wrestling credentials and is undefeated as a professional. I believe that wrestling skill and experience is what will play the biggest factor on fight night.

Madsen should be able to get Pichel to the mat. Once on top, he will hunt for submissions. By the third round, Vinc will be exhausted and Mark will latch onto a choke to earn the submission victory.

UFC 273 Betting Preview: Prelim Fights to Keep an Eye On

Most fans are excited to see the main event of UFC 273. There is no doubt that the prelims are featuring a huge number of exciting fights, too. Many of these bouts are offering fans some huge opportunities to win big, too.

Below is a look at some of the most important UFC 273 prelim fights you should consider betting on prior to fight night.

Ian Garry is an exciting young prospect out of Ireland coming off an incredible knockout win in his first UFC bout. He is an elite striker and has fantastic counter-punching skills. He is facing a tough opponent in Darrian Weeks, who many feel has a bright future in the UFC’s welterweight division.

I have gone back and forth with my UFC 273 pick for this bout. Darian Weeks is very underrated and has shown a fantastic chin during his run through MMA. I feel his experience as an amateur and ground skills will allow him to push Garry to the limit and should earn him a late TKO victory.

Two elite heavyweights are set to compete on Saturday in one of the most exciting additions to this UFC 273 betting preview. Jairzinho Rozenstruik is trying to prove he is still capable of earning a title shot. That won’t be easy against Marcin Tybura, a gritty veteran with solid striking and ground skills.

Rozenstruik is one of the best kickboxers in the heavyweight division. The main criticism toward him is the lack of aggression he puts out in certain bouts. I feel he will turn on the heat in this bout and should be able to score a knockout with his powerful boxing skills in the second round.

Hardcore MMA fans are looking forward to seeing Mickey Gall get back into the Octagon. He is facing a difficult opponent in Mike Malott, who is taking his first bout in the UFC here. It’s a fun matchup between grapplers and many fans believe it will end via submission.

Gall has improved his striking skills tremendously over the last few years. I feel that is what will make the biggest difference in his bout. If he can keep this fight standing, Gall should be able to earn the victory via decision or a late submission after Malott is tired.

Alexey Oleinik has seen several fights fall apart over the last few weeks. Fortunately, Jared Vanderaa has agreed to step into this bout on Saturday. It might come as a surprise to learn that this is one of the most popular bouts to bet on through various US online sports betting sites.

Oleinik is a fantastic submission artist with underrated striking skills. Vanderaa is a tough wrestler looking to break a two-fight losing skid. This is another tough addition to this UFC 273 betting preview, as both of these fighters are struggling to put together wins lately. I feel that the submission skills of Oleinik will be enough for him to catch Vanderaa sometime in the latter portion of this bout.

Saturday’s UFC event is one of the most exciting ones put on so far this year. Every fight is offering something special for fans. Hope is that this UFC 273 betting preview will help fans to form the best and most informed bets for this fight card possible.

Make sure to head over to BetOnline to find odds for this entire card. Many excellent prop betting options are provided for these matchups. Take a look at my boxing pick for Saturday’s Garcia vs. Tagoe fight here, too!

What do you think of this UFC 273 betting preview? Which fight are you looking forward to the most this weekend? Let us know in the comments section below!