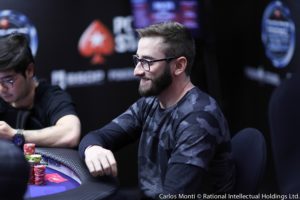 Here’s where you’ll find the latest highlights and PokerStars results, including the Sunday Majors and High Roller Club.

Benjamin “bencb789” Rolle also appeared on several final tables, earning a fourth place finish in the Warm-Up, eighth in the Cooldown, and second in the $1,050 Sunday Supersonic. His three final table results totalled $22,820.

Among the big winners in this weekend’s High Roller Club were Simon “simon1471” Higgens of the UK, “Anjeyyy” of Ukraine and Pedro “pvigar” Garagnani of Brazil.

UK pro Patrick “pads1161” Leonard had several near misses, bagging second place in the Sunday HR, $1,050 Sunday Cooldown, and NLO8 Sunday Supersonic. Although he may be disappointed not to claim the top spots, his final table finishes totaled $29,722; a solid performance and decent results by anyone’s standards.

But it was the Big 20 Rewind – 2001 – Year of PokerStars event that grabbed everyone’s attention. The $11 Freezeout had 12,037 entries, making for a prize pool of $117,962. Along with the prize money, the winner will get a SLAM package, EPT package, and PSPC Platinum Pass. “MrMo19” of Canada has a significant chip lead with nine players left.

Every Big 20 Rewind tourney will have additional prizes for players, ranging from trendy watches to round the world trips. Check out the full Big 20 Rewind schedule here.

Below you’ll find the final table standings and payouts for the weekend majors and High Roller Club events: