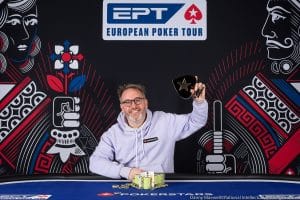 Here’s where you’ll find the latest highlights and PokerStars results, including the Sunday Majors and High Roller Club. Highlights this week include:

In the $1,050 Sunday Warm-Up KO Week special, Andrew “BowieEffect” Wilson chopped the pot heads-up with “x_zola25” of Denmark. Both players took near even prize money. x_zola earned $12,707 for second and Wilson earned $12,758 for first.

Sam Grafton came close second in the Cooldown. Here he is recently winning an EPT trophy

Later on in the evening it looked like Sam “SamSquid” Grafton would bag a trophy for Team Pro. He eventually finished second in the $1,050 Sunday Cooldown for $20,017. Due to the number of bounties Grafton earned ($8.7k of his score), this was nearly as much as first place. “Internett93o” of Brazil claimed the top spot for $23,007.

Major events like the $5k Titans and $530 Bounty Builder HR are on break. We’ll bring you results of those tomorrow.

This weekend’s Sunday Million is a PKO special for KO Week. The event reached a prize pool of $1,225,900 from 12,259 entries. First and second prize are set for $67k, with the overall winner also walking away with the final bounty.

With 89 players remaining, there’s still a way to go. “cakineso” of Germany currently holds the chip lead. We’ll bring you the full results and final table payouts tomorrow. For now, here are the chip stacks of the leading players.