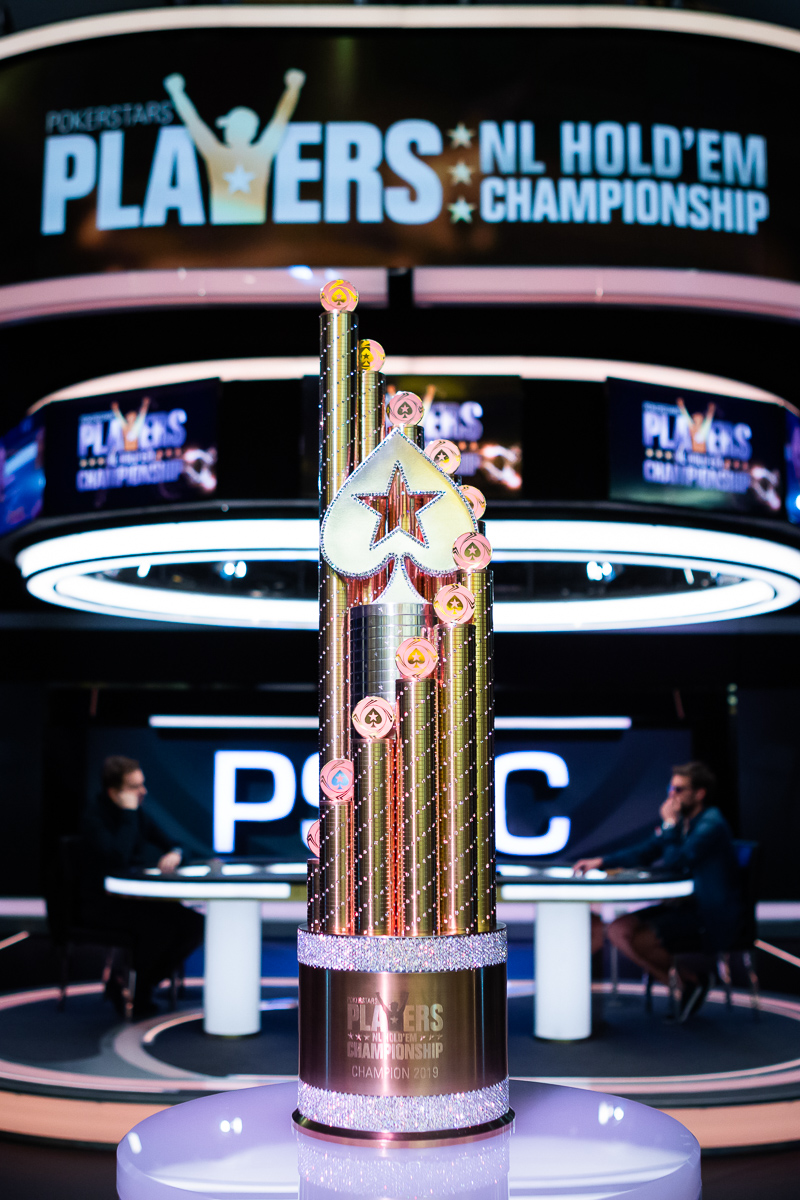 A distinct tremor of excitement emanated from PokerStars HQ late last week, and spread quickly through the wider poker community. The PokerStars Players No Limit Hold’em Championship (PSPC) was confirmed for the Bahamas in January 2023 — a long-awaited, much anticipated announcement, which immediately set poker’s collective pulse racing.

But what, precisely, was so amazing about the news? Why all the fuss about the PSPC?

It’s been 39 long months since the first iteration of the PokerStars Players Championship (PSPC), so you can perhaps be forgiven for not remembering exactly what went on the last time.

A most extraordinary “one-off” event is coming back!

However, the PSPC was a truly extraordinary event, raising the bar for what was possible in a live poker tournament, both in its conception and its execution.

This was the tournament where amateur players rubbed shoulders with elite pros; where $25,000 buy-ins could be secured by people who simple dreamed hard enough, like Willy Wonka’s Golden Tickets. After a few high-profile missteps, which enraged sections of the poker community, this was PokerStars’ peace offering: more than $9 million in added value, attached all to one tournament.

There were no catches either. This was simply a freezeout poker tournament with a $25,000 buy-in, but to which more than 300 players were given free access. The free ticket was known as a Platinum Pass, and it came with flights, accommodation and food and drink too.

Platinum Pass winners’ $25,000 still went into the prize pool, meaning there was $8 million in there to be won by anybody, before anyone other than PokerStars had contributed a penny. For a further sweetener, PokerStars also added $1 million to the tournament winner’s prize. It was a simple, no-strings-attached additional payment. It just happed to be seven figures big, and push that starting prize pool to $9 million.

MORE ABOUT THE PSPC: OFFICIAL PAGE | ALL BLOG REPORTS

For some fairly obvious reasons, the PSPC became the talk of everyone in poker, and 2018 became the year when everybody went hunting for Platinum.

The PSPC was announced — in faintly hilarious circumstances — at EPT Prague in December 2017.

The first Platinum Pass was handed out there and then (again, it’s worth reading about the circumstances) and then, as we previously reported, “Over the coming weeks and months, Platinum Passes rained like confetti across the poker landscape. The Italian pro Andrea Benelli won one in the Italian Poker Open last longer, for example. And Maria Konnikova managed to win the PCA National, while researching her book on how to learn poker. She immediately asked her publisher for a deadline extension.

In addition to these high profile champs, there were also already winners like Adrian Nica, who won the “micro” Winter Series Main Event on PokerStars, a tournament that cost $2.20 to enter. There were random draws at the PCA (one of which gave free entry to one of the best players in the world, David Peters), and Platinum Passes were won across the globe, in London, Sao Paolo, Macau and Sochi. Players like Shuize Cai won a pass in their first ever poker tournament, while James Chen and Aresniy Karmatskiy were playing their umpteenth.

This ratio of amateurs to pros sustained throughout the year, with contests on Poker In The Ears and EPT Live plucking first-timers from their listenership, while EPT Main Events gave a pass to their winners, some of whom were seasoned professionals.

Team Pros also got a chance to hand over a few passes. Chris Moneymaker launched an entire poker tour with his name on it, and offered passes to the victors from some huge tournament fields. At the same time Liv Boeree and Igor Kurganov asked their fans to crack some incredibly difficult brainteasers to be in with a chance of winning. Jen Shahade wanted someone to create a new game, and Lex Veldhuis wanted to reward some generosity.

Even PokerStars Blog had a pass to give away, for which we devised what we thought was an all but impenetrable cipher. A young Brit named Joshua McLaggan thought otherwise. He paused some late-night cramming for his university exams and cracked the code in about 25 minutes. “My only poker experience is playing online poker at the micro stakes,” McLaggan told us. That didn’t matter. He was off to The Bahamas.

Further winners came from the press corps, the Vlogger-sphere and a man who found a Platinum Pass under a Christmas tree (sort of).

All of them were treated as VIPs, with PokerStars dedicating two members of staff — Garry Gates (yes, that one) and Willie Elliot (his WSOP final table will come one day) — to look after them. In all, there were 320 Platinum Passes given out.

Before he was a WSOP final tablist, Garry Gates was a PSPC executive host

Yep, PokerStars took a promise to lay on the biggest promotion ever and made it even bigger. It meant that the stage was set for an incredible show in The Bahamas when 2019 got under way.”

There were, of course, huge expectations before the actual event played out over four days in the Bahamas. All the game’s top pros were in town, but it was those Platinum Pass winners who grabbed all the headlines.

What if one of them went on to win it? What if someone freerolled to more than $5 million?

You probably know by now, but that’s exactly what came to pass.

Ramon Colillas, a 30-year-old former fitness trainer from Barcelona, had won his Platinum Pass by winning a Spanish poker tour leader board, collecting points for high finishes in a series of small buy-in events across his home country.

Colillas turned his Platinum Pass into a famous PSPC victory

Those results pointed to a player who was hardly a rank amateur, but neither was he one of the game’s leading lights. He happily plugged away below the radar for most of the week, before coming to the final table in uncompromising mood.

Colillas and the Frenchman Julien Martini did most of the damage as the remainder of the field departed, and that left the pair of them heads up for the title. They managed to play one of poker’s all time most dramatic hands when Martini flopped a flush with his 9♥6♥ on a board of A♥4♥Q♥. But after the turn and river brought the Q♦ and 5♦, Colillas had backed into a full house with his Q♣5♠.

It marked a huge switch in momentum, shifted piles of chips to Colillas, and the game was over soon after.

Colillas had done it. He had turned Platinum into piles and piles. He signed as a PokerStars Ambassador soon after, and has been waiting for more than three years to defend his title.

Even if all the hoopla was stripped away from the PSPC, the raw stats underpinning the event were astounding. A buy-in of $25,000 put the event comfortably in the “high roller” category of tournaments, usually ensuring a limited field comprising only the game’s elite talents or players with the biggest bankrolls perhaps imported from other pursuits.

But the gift of 320 Platinum Passes to players of all abilities — including plenty whose poker experience stretched no further than some small buy-in sit n goes online, or a knockabout home game — changed the tournament’s complexion entirely.

The presence of these amateur players also ensured that every professional player in the game went the extra mile to book their seat. In short, players arrived to play from across the entire poker spectrum: the top pros fancying their chances against those less experienced; the rank amateurs hoping to spring a once-in-a-lifetime shock; and anyone in the middle pointing to the incredible value on offer.

A huge field descended for the PSPC

That meant a prize pool of $26,455,500, by far the biggest ever hosted under the PokerStars branding, and the largest in world poker outside either the super high roller circuit or the WSOP Main Event.

With $1 million added to first place, the winner’s prize was also enormous. Ramon Colillas, a Platinum Pass holder from Spain, went on to win the event and picked up a $5.1 million haul. It immediately became the largest winner’s cheque ever handed out on a PokerStars tour.

In all, PokerStars added $9 million to the prize pool via the Platinum Passes and the winner’s bonus. But, crucially, Platinum Pass winners cashed for $9,790,450. It was just one more startling stat.

The original PSPC was billed as a one-off, never-to-be-repeated bonanza — but anyone who attended it knew immediately that it was too good for it never to return.

However, organisers also obviously knew that it wouldn’t be enough just to offer a pale imitation of the first PSPC when we reconvened, and so relaunched it with plans to go bigger and better. It was initially scheduled to take place in Barcelona, in 2020, but was postponed amid the Covid-19 pandemic.

Before that interruption, something like 250 Platinum Passes had already been issued. Unofficial word is that dozens more are still up for grabs. We will wait to hear the official line on exactly how many Passes are to be awarded, and how you can get them. And most of all, we look forward to hearing the stories of the people who will be heading to the Bahamas in a bid to emulate Colillas.

The 2023 PSPC will take place at the Baha Mar resort

We’ll all be in a new location. We’ve never before set foot at the Baha Mar Resort, but have heard nothing but good things. And if it’s anything like previous PokerStars Caribbean Adventure jaunts, it’ll be fantastic.

So there we have it. That’s what all the fuss is about the PSPC. And we look forward to creating even more very soon.